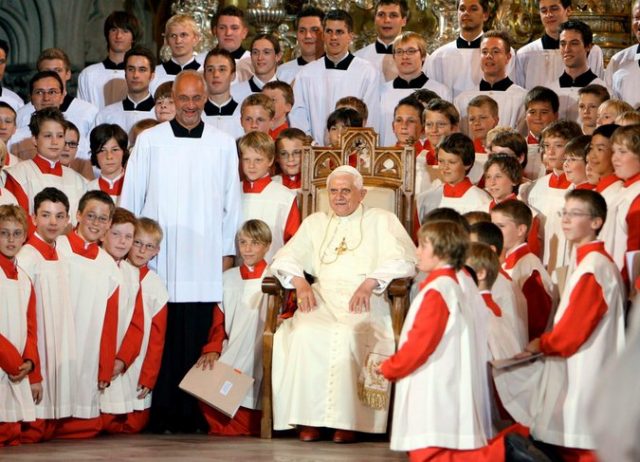 Marquel TPVs NYTimes Abuse It Or Lose It Section correspondent, just discovered the meaning of life and decided to share it with TPV’s readers and the Over 200 Members of German Choir an Investigator Found to Have Been Abused.

The investigator said he assumed that the older brother of Pope Benedict XVI knew of the abuse when he ran the Bavarian boys’ choir for 30 of the nearly 40 years covered by the inquiry. This seems a blockbuster, thought Marquel. Thirty years of abuse by the former pope’s brother. Surely the pope knew too? Maybe not. It’s really not dinner conversation.

“Hey bro, what should we do after dinner. Shot of cognac or go down to the choir and abuse a soprano or two until they sing?”

No, not very likely that anything was said. But abuse is abuse and Marquel spent the last three months studying it at the Vatican’s Center for Child Abuse. Marquel learned that there’s only one way to commit child abuse, according to the Vatican: practice, practice, practice. By then you can commit child abuse in Carnegie hall.
But Marquel decided to further his research by visiting the German choir where the pope’s brother had presided. Memories were fresh. The choir remembered the abuse like it happened this morning.

“He made us sing that coke song. It was torture. I’d rather be dead.” said one small little soprano.

“What song is that?” Marquel asked.

“You know, ‘I’d like to teach the world to sing,” he sort of hummed, “in perfect harmony…” the little soprano then vomited, and two passing monks fell to the floor apparently unconscious.

“So you feel that was abusive,” said Marquel, wiping the vomit off the child face.

“We are a musical choir. We are musicians. We are not…” he paused, “…Americans!”

Marquel walked down the hall and found a trio practicing. He asked them about abuse.

“Rampant,” they all said. “Many members attempted suicide.”

“Why did they do that?” Asked Marquel.

They replied in unison, “Stairway to Heaven.”

“No, not then.” The three replied.

Marquel proceeded further into the practice rooms. One singer was accompanied by a piano. Marquel asked about abuse.

“Abuse? That’s putting it mildly. First there was that teaching the world to sing, then that horrible van Halen trash. Many almost died because of that. The casualties came later. This has been hidden for too long.” Said the pianist.

“YMCA happened. And those ridiculous gestures. The whole choir was hospitalized and the priests insisted we sing and act it in the wards. Two died but they said it was just exhaustion. Like hell it was.” He said.

I went around the convent and found a few choir members having lunch. I asked them about abuse.

“Oh yes,” one said, “the priests have been very abusive of the choir. One year they forced us to sing, ‘you’re having my baby’, talk about torture.”

“Well four of the choir died trying to sing it. It’s like dog poo in your mouth.” One said.

“So I guess that was the low point, huh?” I asked.

He nodded, saying, “‘Chinese Food,’ from which three died.”

“Allison Gold? Nobody knows that,” I said.

“Well the priests looked far and wide to find abusive songs and lyrics until…until…” He said.

“The mass suicide. Half the choir disappeared overnight and nobody has ever been punished.” He said.

“But from what you’ve told me, they’d already committed clear child abuse. Or even adult abuse when you think about it.” I commented.

“So what was the worst?”

He paused. I could see tears in his eyes. He didn’t want to continue. But I persisted.

” Okay. Wham! They made us sing, ‘ Next Christmas’. Over and over again. First, half the basses smothered themselves. All the baritones had a pact. All gone. A lot of the tenors. And half the sopranos. They killed us. Next Christmas.” He protested.

“Yes, that can kill,” I agreed.
I left thinking the church had a lot to regret. I hummed a tune. It ended with,

“Last Christmas, I gave you my heart
But the very next day you gave it away”