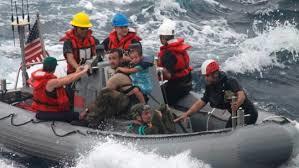 The New York Times finally got it: 2 Tots, a Sailboat and a Storm Over Parenting and Pirating. Or so it seemed until Marquel, TPVs Times Pirating correspond​ent really got it.

It seems this family, the Kaufmans, with 1 and 3 year old children, decided to sail 3000 miles on the open sea from near San Diego to new Zealand, near about 4 million sheep. Taking a 1 year old to the supermarket is considered abusive in itself (to the child, the parents, and the public). Taking it on the open seas seems psychotic. Marquel went to visit the family shortly after they were rescued by a joint navy and air force parachuting frogman team, about 1000 miles at sea where they had found themselves without steering (pretty difficult in a 36 foot sailboat) and, surprise of surprises, a sick one year old.

So I asked them, “What in the world did you think you were doing?”

“Getting some time alone,” said both parents.

“With the kids?” I asked, “that’s not alone, that’s sleeping with the enemy.”

“We love our kids.” They said.

“I love them too,” I said sincerely. “But I wouldn’t want them along if I wanted a serious discussion or even quality time with my spouse.”

“We like to involve the kids in everything, including serious discussions and quality time.” They said.

“”They’re always around?” I asked. “You two haven’t spent any time just the two of you, ever?”

“Never,” they said, cuddling and trying to disentangle the IV tubes from the littlest one’s toes.

They shook their heads vigorously no.

“So tell me why you started out from Mexico. I understand the little one was sick but a Mexican doctor cleared her for the trip? Why not an American doctor?” I wondered.

“He was much cheaper and we needed everything for the trip.” They responded.

“Oh perfect. Things went smoothly. Everyone took six hours watches and we had smooth sailing. It couldn’t have been better.” They said.

“When you say everyone stood watches, you mean the adults, right?” I asked.

“Oh no, we were too tired. The little ones stood watch too. They cry all night anyway so they’re up. We start to drowse.” They said.

“You left a three year old on deck standing watch?” I muttered.

“We took safety precautions.” I raised my eyebrows. “We lashed the three year old to the mast and gave her a flashlight to flash every few seconds. Saves on running lights.”

“But not the one year old?” I entreatied.

“Certainly not. She’s too short to be seen from the mast. We lashed her to the forward stay for her watch. She quite enjoyed it.” They answered.

“Actually, yes,” they said, “except when it stormed.”

“Betcha didn’t take her in just cause of a storm,” I ventured. They both smiled like they’d just meet their best friend. “Tell me, What did you do when not standing watch? Recreation, games, reading, calculus lessons?”

“Their favorite game was pirate,” they said.

“How’d that work?” I wondered.

“We would put on pirate costumes and chase them around the deck till we caught them. We’d tie their hands and make them walk the plank. They loved it! We loved it!”

“When you say walk the plank, you put a board over the side and made them walk off the end into the sea?” I asked.

“You know the game!” They both said.

“Never played it myself. I heard that the little one got sick because you washed the diapers in the sink,” I said.

“Was that a piece of bad luck!” They exclaimed together.

“You’ve got the whole Pacific ocean there to drag the diapers through, you could have just let them trail for a while and they would have been spic and span.” I said.

“The ocean is a temple,” they both said, “would you pollute it with baby poop?”

They were shocked. The three year old got up and went out the door.

“She’s got her papers to deliver. We were lucky to find that gig for her.” They said.

“Aren’t you guys employed?” I asked.

“”Certainly, “they both said.

“We have trust funds.” They said together.

“That’s your job?” I wondered.

“Yes,” they said, “we have to keep track of them and make withdrawals now and then. It’s not as simple as it first seems.”

“Do the babies have trust funds?” I asked.

“They would have, had the sail been successful, but part of the blame is shared by them so we thought it a good lesson to hold off on the trust fund until they completed a mission successfully.”They chimed in.

“Yes, exactly, just as we have successfully handled our trust funds we want them to feel the joy of self actuation and success.” They said.

“I suppose this paper route is the first step.”

“Definitely. If she makes enough for a new boat, we’ll make the voyage again, but maybe with more medicines. You wouldn’t believe what you can catch from a diaper,” they said.

“Nor from a pair of idiots,” I couldn’t help saying. But they had an answer.