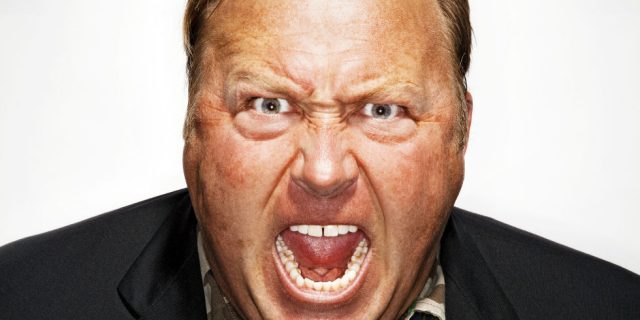 You may have heard of Alex Jones of Austin, Texas — the fellow who markets his own brand of “BRAIN FORCE” and “SUPER MALE VITALITY” pills on the radio.

He’s the guy whose Infowars.com website features headlines like “HEAVILY ARMED MUSLIM THREATENS CHRISTIAN CONSERVATIVE CONFERENCE.” The one who describes himself on the website with a pithy summary of world history that begins as follows:

Since the beginning of time there have been constant attempts to enslave and subdue the spirit of humanity. From barbarian hordes streaming down the mountain to the Stasi secret police torturing those who dreamed to be free.

That’s the early Trump supporter Alex Jones who, pushing birtherism one giant step further into the inferno where truth is drawn and quartered, let his listeners know the other day that “the word is that [Malia and Sasha Obama] aren’t even [Barack Obama’s] kids” and that the former president was hiding out in French Polynesia last month because they have no extradition to the United States?

The same Alex Jones who, according to Maggie Haberman in The New York Times, said he took one of Trump’s first phone calls, the first Friday after Election Day, “thanking Mr. Jones for his support.” (Aides to Trump did not respond to Haberman’s request for comment.)

MORE ON FOR THE RECORD

Lest We Forget: the Birther Lie

The one whose radio show airs on 150 stations, whose website collected 7.6 million unique visitors during the last month, and whose YouTube channel has more than 2 million subscribers?

The one who says, “We break it down first,” featuring the news flash, darkly neglected by mainstream media, that Vladimir Putin said Bashar al-Assad’s chemical attack was a “false flag”? The one whose collected false flags — purportedly phony attributions — include “fake news” about Boston Marathon bombing, the Oklahoma City bombing and the Sandy Hook massacre?

The same who cites mainstream media whenever they echo something first declared on Infowars? The one proclaiming that “we only see the pictures of dead kids when there’s an agenda to be told”?

The one who proclaims himself “the heart of the resistance” for “patriots worldwide,” seemingly untroubled by the likelihood that North Korean patriots feel attached not to the America of Donald Trump but the North Korea of Kim Jong-Un.

The one whom his hometown paper, the Austin American-Statesman, calls “an ingenious and indefatigable conjurer of conspiracy theories about sinister global elites seeking to enslave the masses.”

Or is Alex Jones the fellow whose lawyer recently told a judge at a pretrial hearing in a child custody case in Austin: “He’s playing a character. He is a performance artist.” The lawyer, Randall Wilhite, declared “that using his client Alex Jones’ on-air Infowars persona to evaluate Alex Jones as a father would be like judging Jack Nicholson in a custody dispute based on his performance as the Joker in Batman.”

The practitioners of strategic insincerity do not retract or apologize. They ‘walk a statement back.’ They ‘regret’ having ‘misspoken.’ They issue nonapology apologies, as in: ‘I apologize if anyone was offended.’

Now, the claims of lawyers are not certificates of truth, and it is not my place to take sides in Alex Jones’ custody battle. But I bring this sordid business up because Alex Jones’s lawyer is not original. He parrots a theme that ricochets through American culture. If you’ve heard it recently, odds are you’ve heard it from the president of the United States or one of his band of idiots.

Donald Trump does not apologize; he says he was “kidding.” During the campaign, after insisting that Barack Obama was “the founder of ISIS,” and having gotten all the mileage he got from a flat-out lie that it would be merciful to call insane, tweeted a morning-after tweet that he’d been “sarcastic. “

The practitioners of strategic insincerity do not retract or apologize. They “walk a statement back.” They “regret” having “misspoken.” They issue nonapology apologies, as in: “I apologize if anyone was offended.”

If any more evidence were needed that we inhabit a reality-show culture, here it is. A reality show is to reality as to sarcasm is to irony. This is, not awesomely, a no-accountability culture. It traffics in smears harnessed to smirks that follow along just behind to collect the poop. It will say anything, anything, for effect and deny you the right to object without playing the fool. It’s a culture where a serious publisher issues a book called Old School by the accused serial sexual harasser Bill O’Reilly.

It’s a culture in which Bret Stephens, a climate-change denier with a nice prose style, is anointed a New York Times columnist in the hope that he will help “further widen” the views purveyed in the paper. You could see this coming when the sainted Tim Russert put Rush Limbaugh on Meet the Press to talk about Iraq, and when I called to protest told me, “He speaks to 14 million listeners” — as if that was a reason. It’s a culture in which even a Vox video blast at what passes for debate on CNN has to be punctuated with jokes.

The joke is on America, but repetition makes it no funnier.