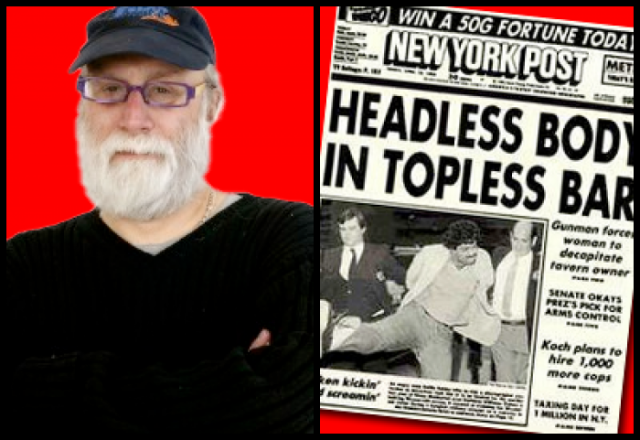 Vincent Musetto, 74, Author of ‘Headless’ Headline of Ageless Fame, Is Dead, read Marquel, TPVs NYTimes Say It Again Sam Section correspondent. Marquel mourned. The famous Post headline writer had penned the world’s most famous headline after a murder in a bar: “Headless Victim in Topless Bar.” Justly celebrated for that, agreed to be the best in history, Musetto surely had many more winners.

A dispute between a Chinatown planning board and a kosher restaurant read,

“Bagels and Woks get  F from planning board.”

Put down from his post for awhile for Treasonous Headlines, Musetto returned with this for Lehman Brothers,

“Too small To Fail, Too Big to Succeed, Lehman is Juuuuust Right.”

After that, he covered the Occupy Movement, saying this about the downtown crowds, “nobody goes there anymore  it’s too crowded.” When accused of plagiarizing Yogi Berra, he quipped, “Quote him once, it’s your fault, quote him twice it’s his, third time it’s yours.”

But the amazing thing about him was that it wasn’t just a job, it was a life. Marquel spoke to his wife.

“Oh yes, everything he said was a headline. In the morning he didn’t say good morning, he’d say, ‘couple wakes up in Brooklyn. More later.’ ”

“So he spoke in headlines continually?” Marquel asked.

“It was amazing. We could be in the car when I’m driving and he’d say, ‘cars nearly collide on Belt Parkway from the left’ instead of screaming, ‘watch out!’ ” she said.

“I don’t think I’ve ever heard of something like that. It must have been a difficult if interesting life,” commented Marquel.

“Absolutely. In bed he’d say something like, “Couple profess love in the Heights. Husband impatient.’ ” she said.  “That’s when I started doing it too. I’d find myself just blurting out, ‘Brooklyn wife asks husband to get moving.’ Once I even said, ‘Brooklyn wife tells lover he’s missing it.’ “

“In a strange and unique way,” she admitted.

She looked at me as if I were a complete stranger, which I guess I was.

Strange, I thought, but no stranger than a headline about a headless body in a topless bar.