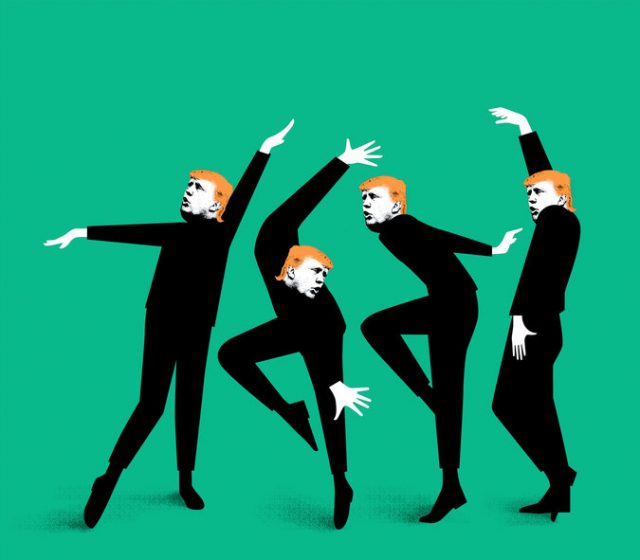 Marquel, TPVs NYTimes Reality Section correspondent, went to market to buy a pet and tripping read We Invited Donald Trump to Town. According to Frank Bruni, one of the Times only honest writers, the Donald is the necessary result of our confusion between Kim Kardashian and Eleanor Roosevelt, JFK with Kanye West, and George Washington with Christian Siriano.

It all started, says Bruni, when Marilyn Monroe appeared at JFKs birthday party followed up by Richard Nixon‘s cringy appearance in Rowan & Martin’s Laugh In. It continues with Obama’s appearances on Jon Stewart.

All of the rest, not just the Donald, are heirs to that disaster which destroyed the distinction between consequential public events and fluff. The Donald is fluff, accidentally on the presidential stage. Who’s got the hook? That’s the problem with democracy. There’s no hook and nobody appointed to use one (except for the Supreme Court who found they had a hook, whether or not appointed, to get Al Gore off the stage.)
So Bruni  is right but, like most critics, he’s long in diagnosis and short on cure. He rightly calls Trump the demon we invited to the carnival. So the fault, this time, may be in our stars after all, but mostly in our souls.
Marquel met with some communication professors to ask for a way out of this. The solutions were mostly big ticket, if not in money, then in cultural momentum.

“Well obviously, education is key. These developments coincide with the dumbing down of our schools. No wonder people confuse comedians with politicians. They’ve turned politics into comedy.” Said one expert.

“So do we change our entire education system?” Marquel asked.

“No, a course. No test at all to avoid comparisons with Jim Crow. But if you want to vote, you have to take a voting course. Just like a driver’s license but it expires every four years.” He said.

“That’s never going to happen because the candidates could never get through such a course. Imagine Donald Trump or Huckabee what the First Amendment says.” Said Marquel.

“That’s not our only idea. Another one simply reverses current events. If we’re going to get our candidates from tv shows and circuses, require everybody in entertainment to get a PhD in political science. It would improve both entertainment and politics.” He said.

“So the clowns in the circus will all have graduate degrees? I’ll have to call them Dr. Clown?” I asked.

“You have to admit it would be a  refreshing change.” Said one of the experts.

“And the judges on America’s Got Talent, too?”

“Might work with some. But I think big money will get around this.” I said.

“Yes,” said a third expert. “But there will be no big money. No millionaires or billionaires allowed.” He said.

“How is that going to happen?” I asked.

“To be constitutional, discrimination has to have at least a reasonable basis. You take ten ordinary Americans, five will be dumb. Take ten American millionaires, nine will be dumb. Often, all ten. They can’t be allowed to run or even contribute campaign funds.”

“That would certainly work but right now they’re in control. How do we get rid of them first?” I asked

Finally one spoke up. “We don’t have a good answer to that. We have to attract them with a good enough offer that they’ll leave.”

“Twenty one virgins?” I asked.

“Something like that. They mostly, though, want position and power. We’ve thought they might function well as African despots.” He said.

“In summary, we can only get better if we poison a whole continent.” I said.

“Well nobody asked us to improve the world, just the old USA.” He said.

“You weren’t asked to study that.” I said. They all nodded agreement.
***
By MARQUEL: Cringing Nation