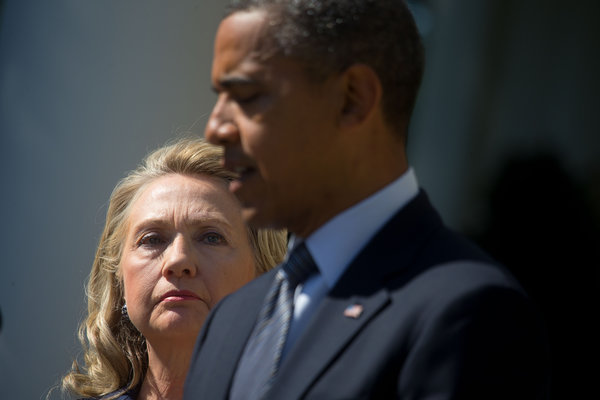 Marquel is angry. He doesn’t especially like Obama although he recognizes that the job may be more limited than he has always imagined. I mean if George Bush could get a war declared fraudulently, couldn’t Obama have done the same with health care (“Health care under foreign threat. Nationalization urgently needed to rescue America from Bolsheviks“)?

But enough of that. Hillary is now preparing a strategy blaming her failures (or lack of any visible qualifications) on…Barack!

If she is elected I would insist that she be called President Chutzpah.

I went up to 125th street, effectively Hillary headquarters, because that’s where Bill hangs and who is this campaign all about, anyway? They were all ready for me. There was a sign that said “Welcome Markwell.” I hadn’t told anybody but my taxidermist. But that’s not completely surprising. The Clintons are well known for their pr and networking. Not so much for their spelling, I guess, and maybe general intelligence. Who needs it. Look at Millard Fillmore.

This was my second meeting with Hillary. The first one was several months ago, so I was surprised by her warm greeting. Time to stop that, I decided, right away. Let’s get down.

“I understand you think you’re presidential chances may be somewhat handicapped by the Obama administration. Is that true?” I asked.

“Well, not the administration itself,” she answered, “but the very existence of a two term president makes it difficult for me.”

“People have gotten used to Obama,” she answered, “and I’m a new quantity. That makes it difficult.”

“You’re saying that you blame Obama for making you seem not Obama?” I asked.

“Well that’s a funny way of saying it, but there’s a certain truth to it.” She answered.

“Well, what about the fact that some people might just not want a woman president?” I asked.

“Yes, that’s definitely a problem created by the Obama administration.” She said.

“You’re saying you blame Obama for not being a woman?” I asked.

“Again, that’s a funny way of putting it,” she said, “but it’s essentially true.”

“How about the fact that some people just seem rubbed the wrong way by you?” I asked.

“Yes, Bill has always felt  that way,” she said.

“No, I think perhaps you misunderstood me,” I said, “I mean people just feel a kind of personality conflict with you?”

“That’s all Obama’s fault.” She answered. “If he hadn’t made me Secretary of State, I wouldn’t seem so  harsh.”

“You took the words out of my mouth,” I said, “that’s what I meant.  Some people find you a bit harsh.”

“I do know.” I said. “You may be right about that. But what about health care. Didn’t he succeed where you failed?”

“Oh, pullleeeeze,” she said, “that’s certainly a problem caused by Obama. If he hadn’t created Obamacare, I could have  had a major cause to run on.”

“So you blame Obama for passing health care instead of waiting for you to do it?” I asked.

“I guess you could say so.” She said, “he really has made it difficult for me”

“I don’t want to bring up Benghazi, because it’s been so overdone and become so politicized. But it is an issue and I’m wondering if you think Obama is responsible.”

“Responsible?” she asked, “he should be jailed for that! But enough about Benghazi, as you say.”

“Okay,  enough.” I said. “I am beginning to understand why you feel Obama has made your next move more difficult. It’s really unfortunate.”

“Yes,  it is unfortunate,” she said, “I’m glad you see that. If he would just stop giving speeches. He makes me seem inarticulate. And that I am certainly not.”

“Huh?” I asked, then I understood. I think. “Yes, Obama could make those who follow him seem less articulate. So  you blame him for that?’

“Oh, yes, he has been a disaster. I could almost agree with the Republicans  in their feelings about him,” she said. “If he could just use simple language, and just chill a bit when he speaks publicly.”

“Yes,” I said, “he does take advantage of his verbal abilities, doesn’t he?”

“But what about you speaking out, however inarticulately? Why haven’t you said anything about the drone attacks on innocent collaterals, and the targeting of Americans without due process?”

“Again,” she said, “you’ve spotted another problem Obama has created. He’s just a mess. Going around killing every person he can find. Don’t you think, just by that contrast, I would be a preferable candidate?”

“Well, I don’t know about contrast. Do you mean because he has a darker complexion than you?” I asked, just trying to needle her.

“Oh my God, of course!” she exclaimed, “he never had a right to do that. It makes me seem so…just so…intolerably white, don’t you think?”

“You do seem terribly white, you’re right,” I said.

“Blame it on Obama.” she said.