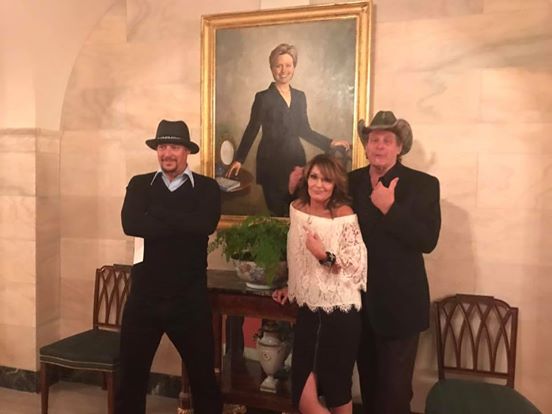 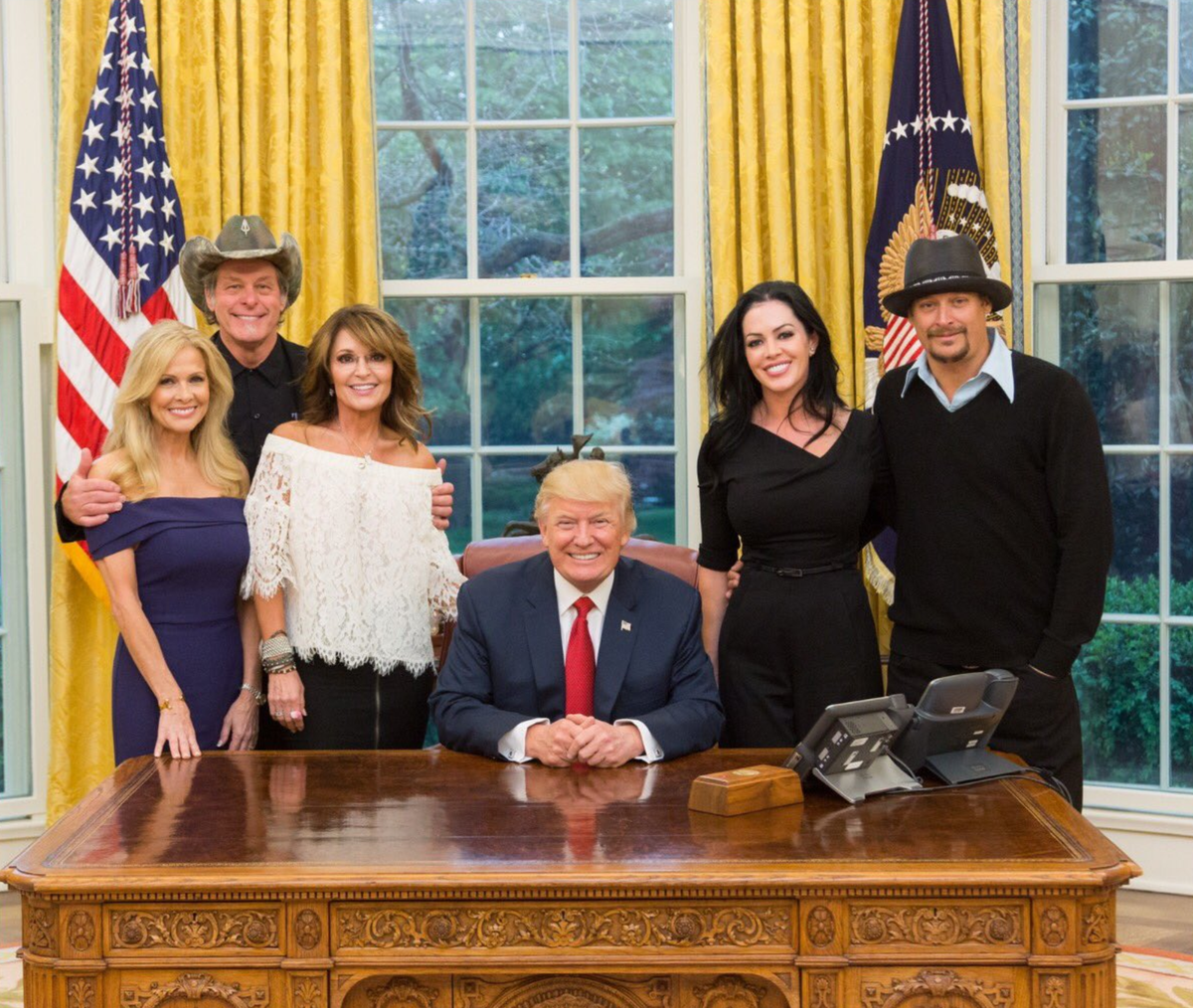 President Trump treated the trio of high-profile supporters to a private dinner, a room-by-room tour and a wide-ranging discussion on Wednesday night.

Marquel followed closely behind the group as they approached White House security. After a half hour trying to figure out who Ted Nugent was, it was Marquel’s turn. He pointed to Nugent and said, “I’m with him,” and the secret service agent waved him in. He was in!

They met Trump and the president pointed to Marquel. “Who’s he?”

“I’m with him!” Said Marquel, pointing again to Nugent.

They all sat down, and Palin said, “I can see a Russian from here,”

Trump pointed to the far side of the room,

“That’s Vlad.” Putin stood up and bowed to the group.

Marquel added, inexplicably, “I’m with him!” pointing at Putin.

Palin smiled, waved at the Russian, and said, “Ooooohhh, I know him!”

The four and Marquel discussed terrorism.

Trump said, “it’s Muslims. But they won’t let me touch them.”

“They’re in charge, although they don’t do any of the bombing. Too smart.”

Trump cleared his throat and all eyes were on him. Except for those of Putin, still in the corner, and Marquel, who gazed longingly at each other.

“We’ve got to get a handle on this terrorism thing. If I could just get one thing done around here…” Trump complained.

“The secret’s hunting. Get those Muslims interested in hunting and you’ll solve the problem. “

Yep, huntin’s the answer. They already got the guns right?”

They all grunted. Marquel blew a kiss to Vlad. Vlad sent one back.Trump inquired,

“Do you really think that would work? How should it be done?”

“Just grab every Muslim you can. Ask them if they hunt. If they don’t, offer to take ’em squirrel huntin’. “

Trump looked both happy and mystified.

“One by one? I think there’s a lot of Muslims. Do we have time?”

The other three said,

“We can do this with the NRA. I’m on the board you know. It can be a national campaign and I’ll bet you that within a year we’ll have every Muslim hunting.”

“That would sure solve the domestic problem. How about a prize or even a law allowing Muslims to hunt endangered species, like that lion the dentist shot. That was a good day in America.”

The other three grunted agreement.

Trump said, “I would say the last great day in America. We can make America great again!”

I finally took a chance and decided to participate. “We could get the ARA to sponsor the same thing in the Mideast. I’m on the board.” I figured they’d throw me out soon so what the heck.

“The Arab Rifle Association. Just like the NRA but for Arabs.”

“I’m just on the board but the man to talk to is its president, Mohammed LaMuslim” I could see Trump copying all this down on a pad, so I decided to go for broke, “or its vice president, Dwayne TheTub.”The three continued on, and I felt I’d done my job. I told them I had to go, shook hands and embraced Putin. We kissed.

I left the room and could still hear Palin.

“Oh I don’t know. If Trig had stuck to boys, we could have avoided a lot of trouble.”

***
By MARQUEL: Four Short Hours at the White House