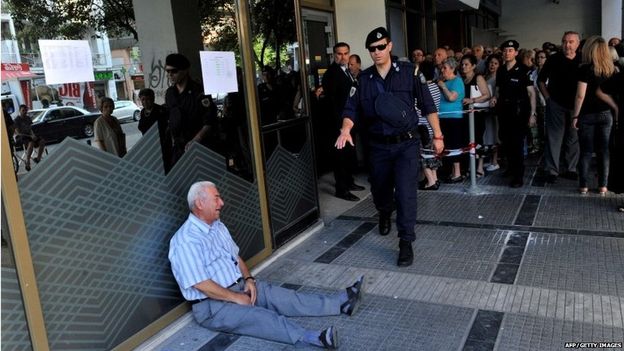 Marquel was eating his cake and selling it too, when he read Greece Might Be Better Off Outside Eurozone, German Finance Minister Says. Merkel said this a day after she agreed to an accord that welcomed Greece to stay in the eurozone.

It reminded Marquel of children teasing the weakest one. They send him an invitation to the birthday party and then sidle up to him saying,

“you’ll probably be much happier if you stay home. You’re really not cool enough, not nearly cool enough. Basically…You’re a loser.”

Marquel knew that was only the good part of the story because it was Merkel and her crew who turned Greece into a loser…for a profit. The Germans lent so much money to Greece when it was already effectively bankrupt that there was no chance…truly zero chance…that it could pay the loans back.

Having driven it into the ground, it then imposed murderous conditions to bail out the country. That’s when it invited Greece back into the party, knowing it couldn’t afford new underwear, let alone a nice party dress.

Having assured Greece it would be a pauper forever, Merkel slyly suggested it stay home.  These were not just mean kids, they were cruel, teasing an insect apart with garden tools to see when it stopped moving. So Marquel called Mufi.

“Mufi, do you have access to the NSA intercepts?” I asked.

“Let’s just say that there’s no information that is truly secret. What do you need?” He asked.

“Merkel’s cell phone number.” I answered. “Sure, I’ve got it right here,” he said, spelling out the number in military terms.

“You should know however, that even though it’s her private number, it’s not.” He said. “

What do you mean?” I asked.

“It’s not private. As soon as the NSA tapped it, the Russians and French came along. And the British too, and the Danes and Norwegians. So nothing you say will be private. It’s like an old country party line. I’ll show you.”

He connected to the phone.I could here silence until Mufi said, “It’s Mufi here. Who’s around?” “MI5 here” “Sécurité en ligne,” said the French. “Politiets sikkerhetstjeneste,” said the Norwegians.” Indeed it was like a party line.

Mufi asked, “Where is Angela?” Somebody answered in accented English, “She’s on the hopper. It usually takes her seven or eight minutes.”

“How do they know that?” I asked Mufi.

Mufi said. “Call in eight minutes. You’ll get her.”  I dialed in nine minutes and got her.  “Angela, it’s Marquel,” I said.

“I couldn’t imagine. What do you need?” She said.

“Why did you invite the Greeks to stay in the eurozone then disinvite them?” I asked. She laughed.

“It was so fun Marquel. First they were overjoyed. Then they were miserable. I hinted I was kidding and they felt better. Then I told them I was serious and they felt even worse. I haven’t had more fun since grade school when we studied the war. It’s indescribable.”

“But you were the ones who put them in this position. Why did you lend them so many millions of dollars you knew they couldn’t repay?” I asked.

“There are many reasons. As president, this is my competence. It is an opportunity to tease an entire nation. If it’s fun as a child it’s much more fun as an adult. But only a president can do that. So it’s a privilege of my office. Second, if we loan Greece money it can’t repay, it’s economy will crash and everything in Greece will be cheap. I can buy an entire Greek island for peanuts. All the Germans will be able to vacation there for almost free. Imagine! And there will also be free labour. The Greeks can assemble our machinery for free practically. It’s a great thing for Germany.”

“This sounds like a Germany from the past.” I said.

“Not at all. It’s just that Germans have always known that society must be unequal so the superior people can enjoy the inferiority of their lessers. It’s life.” She said.

Not necessarily, I thought, but perhaps Germany has never changed. They have certainly become the bullies if Europe. For the second time in seventy-five years.