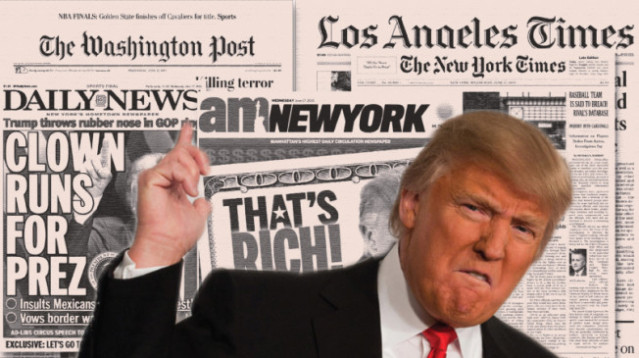 Why Trump’s Media Intimidation Strategy Is Bound to Fail. Trump is pursuing what he thinks is a win-win strategy. But there’s more than a whiff of panic in his recent maneuvers.

When Donald Trump shoots spitballs at CNN and other “enemy” media, it’s both a bonding ritual and an intimidation gambit. See him wrestle a CNN-branded loser to the ground in a tweeted video! His crowd whoops with joy, all the more so when they can trump up a “blackmailing” scandal that makes CNN look like the aggressor.

(Fox News reveled: “CNN was facing almost universal backlash on Wednesday after running an article on the Reddit user who made an anti-CNN, wrestling-themed GIF tweeted by President Trump over the weekend.”)

Trump has also just discovered, if he didn’t already know, that whining about journalists brings him commiseration from fellow victims like, well, Vladimir Putin. When at a photo op before their summit meeting in Hamburg, Putin leaned in to Trump, pointed to the journalists present, and asked:

“These are the ones hurting you?”

“These are the ones. You’re right about that.”

Trump is pursuing what he thinks is a win-win strategy. But there’s more than a whiff of panic in his recent maneuvers.

Win 1: He heightens polarization by signaling to his loyal base that he’s their man. He’s wired to them. He bears their standard. He suffers for them. Case in point: CNN. Half the public considers the network more trustworthy than Donald Trump, according to a survey released last week. Half of those surveyed trusted CNN more; 43 percent trusted Trump more. Trump’s approval ratings haven’t gone higher than 42 percent since April, according to Gallup, or since March, according to fivethirtyeight.com’s weighted average. But it’s the intensity of feeling among his 42 or 43 percent that he counts on to produce results in the months to come. Self-identified Republicans  drastically prefer Fox News to any other network — indeed, almost three times as many as all other networks put together. Only 9 percent of Republicans trust CNN more than Trump, while 89 percent of Republicans feel the opposite. By all accounts, Trump is himself Fox News’ biggest fan. When he gazes at Fox News, it is his own reflection he sees, which is what he wants most to see.

Win 2: At the same time, Trump strives to intimidate his enemy. He “works the refs,” shouting down the referees so that, over time, in little ways, they recalibrate their judgments and make nicer. Even dreaded CNN is still hiring robotic Trump flacks as “commentators.” The New York Times editorial pages felt it advisable to hire climate denier Bret Stephens as a twice-weekly columnist, although the business rationale for that decision would seem thin. This is not so much a business decision as a self-image touch-up. Management at The Timesfears being identified with the left. It ill-comports with their sense of themselves as Establishment guardians.

As for CNN, “White House advisers” let The Times’ Michael M. Grynbaum know they have discussed a potential point of leverage over their adversary, a senior administration official said: a pending merger between CNN’s parent company, Time Warner, and AT&T. Trump’s Justice Department will decide whether to approve the merger, and while analysts say there is little to stop the deal from moving forward, the president’s animus toward CNN remains a wild card.

A “senior administration official” only tells The Times they’re exploring this “potential point of leverage” when he or she wants to send a message to CNN:

We run Jeff Sessions’ Justice Department. We approve mergers we like.

Some on the right go further, firing a shot closer to the bow of CNN chief Jeff Zucker:

The White House does not support the pending merger between CNN’s parent company Time Warner and AT&T if Jeff Zucker remains president of CNN, a source familiar with President Trump’s thinking told The Daily Caller.

Intimidation is the name of the game. Zucker made Trump’s reality TV career, and (as Grynbaum himself noted during the 2016 campaign) pulled out the stops to puff up CNN’s coverage of his golden boy. Trump may well feel betrayed now, and nothing brings out his vindictiveness like betrayal. But don’t sell Zucker short. He may have interesting retaliation material in his arsenal.

Meanwhile, warnings as blunt as the one noted by Grynbaum have not worked with the The Washington Post, whose owner, Jeff Bezos, must revel in the attention and esteem his tough-on-Trump reporters have brought him. It’s greatly to The Post’s credit that Nixonian threats directed there during Katharine Graham’s stewardship failed four decades ago, though only after Republican business threats on The Post’s TV licenses succeeded in halving the value of Post stock. Of course Jeff Bezos’ pockets are deeper than the deep blue sea. Even as Amazon accounts for only 5 percent of retail sales, its growth curve threatens to “eat the retail world” in the years to come, as one industry analyst puts it. Trump’s lawyers, not especially given to niceties, may well be holding threats to Bezos in reserve.

In any event, for the most part, Trump must think — if “thinking” is what he does — that he benefits from polarization. Distrust in media overall, as measured by Gallup, is at a record high since polling began on that question in 1972. It’s the fall-off of Republican trust that makes the biggest difference.

But in the end, Trump’s love of the combat goes beyond calculation. Trump is never happier than when preaching to his choir. The thrill of the wrestling match launches his testosterone. He’s come this far by managing the chaos that encircles him like one of his interchangeable suits. Barely managing it. As I write, White House advisers are beginning to leak dirt about Donald Jr. As White House staff members lawyer up and Robert Mueller continues his investigations, this is not the kind of chaos Trump bargained for. World Wrestling Entertainment won’t save him. It is, after all, the fakest of fake news — that’s its appeal. His political agenda, such as it is, is flaking away. Trump was supposed to be the Gilded Chief, not the gelded one. Watch for more panic.

Gitlin’s Spells It Out: Trump’s Media Intimidation Strategy Will Fail