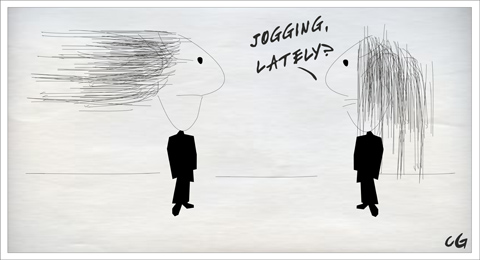 Unless hyped, hair is such a non-issue, that one would be baffled to hear that Hair makes for a less repetitive musical than Mama Mia! For hippies, hair reached cultural status. In 1968, it became a Broadway hit: Hair: The American Tribal Love-Rock Musical, and some of its songs became anthems of the anti-Vietnam War peace movement. In 2011, non sequitur statements are trendy. Always trendy, The New York Times devotes an article equating hair problems with health problems: “Surgeon General Calls for Health Over Hair” (8/25/2011).

Dr. Amy McMichael, a professor of dermatology who led the study, said she had noticed over the years that some of her overweight patients would mention their hair when explaining why the gym was off-limits.

“Being an African-American woman myself,” she said, “I have to go through those same trials and tribulations when I exercise, so I started to realize that this is probably a barrier for many women.”

Like The Times, I have conducted my own investigation into my own various observations.  I have frizzy fuzzy hair. I don’t particularly like it. Also, I have problems eating only when I am hungry and stopping when I am full. Nevertheless, I find gyms so yesterday. (N.B. Yesterday I found them relics from the day before.) I am going to make a leap of logic and jump from hair to weight and then to gyms. Within this leap, I will tell you that I strengthen my hair occasionally. I never questioned my doing it. It could be one way to deal with anguish and existential despair. When straight I do not wash my hair for 3-4 days in a row. I try to avoid humidity.  And if the subject would come up, I would list gyms as places to avoid.

What can I conclude based on my study? Hair is among things people acknowledge caring about. Surprisingly, my study does not indicate that people with fuzzy hair avoid gyms because they want their hair straight. At most, it indicates that people with weight concerns do not like gyms, and are willing to make up any excuse which will avoid saying: I ain’t going to the gym. Want a reason? My hair.