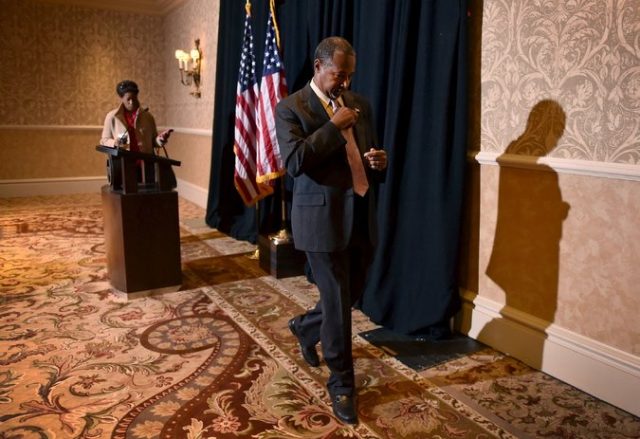 The candidate’s remarks on the Middle East and national security have raised questions about his knowledge of the subject, and advisers say tutoring is having little effect. He still didn’t understand the difference between Iraq and Iowa. “They’re both states, right? Do I need to know that. You guys are making this more complicated than it need be.”

In fact the most discouraging aspect is that he has two former secretaries of state, two university presidents, the Foreign Policy Institute’s best researchers, and he literally had no idea of what is going on. Marquel asked if he could observe the tutoring and the idiots agreed.

They were trying to teach him how terrorism grows but he was resisting. “Look, the Second Amendment says you have a right to a gun. Believe me I’ve seen shot up bodies before. But nothing’s worse than taking a person’s gun away.” He said.

His advisors said, “Ben. There’s no Second Amendment in Iraq.”

“That’s simply impossible. It’s in the Constitution.” He said.

“But there’s no Constitution there,” they said.

“Of course not. It’s in Washington.” He said with a knowing smile.

“That’s because Iraq is not in the United States.” They said.

“But that’s not true. Our soldiers were there. Of course it’s in the United States.” He said.

“Ben, that was an invasion. Usually wars are between different countries. Do you get that?” They asked.

Ben started laughing, almost hysterically. “Yeah I know about the Civil War. That freed us slaves. Biggest war ever. Between what countries? The United States! You guys are feeding me a load of crap. I doubt you know foreign policy at all.” He said.

“No Ben we’re trying to help. You must know that France was bombed recently and they’re actually going to war with the Daesh. Should we talk about what the U.S.position should be?” They asked.

“The French? Ha! Freedom fries! We don’t care about them!” He said.

“But we do. We’re allies. Their fight is our fight.” They said.

“Allies? Who else are our allies in this?” Asked Ben.

“Well, the Russians. They were bombed also by Daesh, and so the French, Russians, and we are allies in the fight against them.” They said.

“This reminds me of medical school, with all those there hundred tutors trying to help me pass, test by test.” He said.

“Why does it remind you of that? We’re teaching you foreign policy, not medicine.” They said.

“Yeah but you’re trying the same deception. Nerves carry electrical signals, huh? Before even electricity was invented? How is that possible. It’s like the Russians being our allies. And I suppose the brain does all our thinking? I’ve seen brains. They look like liver jello. If brains could think they’d kill themselves.” Said Ben.

I excused myself and went home. I got out some jello and talked to it. It stared at me defiantly. Maybe Ben was right. About what, I hadn’t a clue.