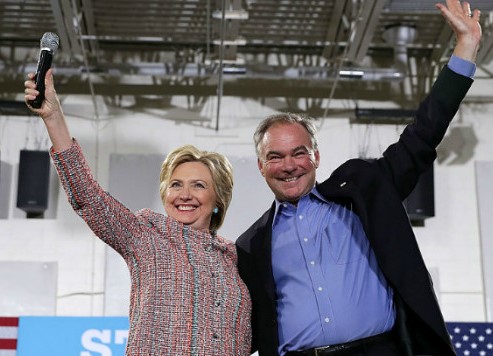 Hillary has chosen her running mate, Virginia Sen. Tim Kaine, and she’s proved consistent. No games. No false promises. Her core values have come on display:

#Hillary means business. The Sanders, sand revolution, is over. America is a capitalist stronghold for the Mighty Man & Woman whose parents, god bless them, made it. Okay, Hollywood and Silicone Valley still seek talent, and we will always keep jobs open for the entrepreneurial dish-washing busboy, come he from the Far East (China) or the nearby South America (Mexico and south of it). Oh, and the nannies. I forgot about them. They can be as young or as well educated as they want and they can even speak foreign languages. It’s chic.

And this is why #Hillary has a great chance to win. Because #Hillary is a Conservative Reganite to the right of Bush the 41st, and right there with Bush the 43rd.

And this is why Michael Moore is wrong. Sadly. Fearfully wrong. Hillary has successfully destroyed whatever was left of the 1960’s and the baby boomers’ belief in some form of 60’s progressiveness. RIP Michael Moore and those like you. BTW, there is no need to misrepresent Hillary as something she is not: decent. She will win because she has finally come to terms with herself: A Conservative Reganite to the right of any old school American Republican.

Long Live the Mighty Dollar and Everybody with a Master!

As for the rest of us, the next best thing to trying and winning is trying and failing, and, this is for you, Mr. Moore, remaining true to oneself.