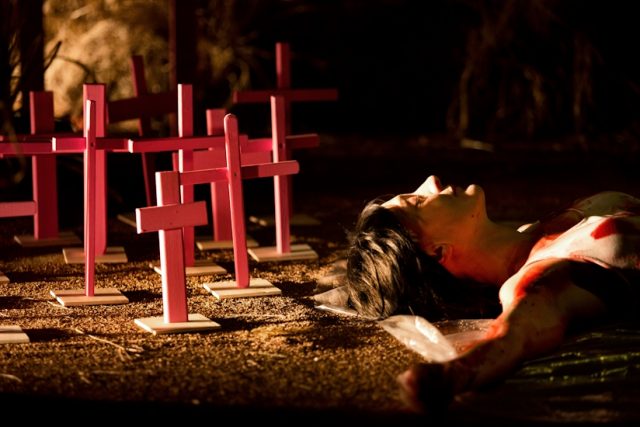 Beneath a kettle of vulture eyes

the city is an open wound.

in the broken house of god.

to ears that cannot fathom sound,

from the screech of lawless federale sirens

in search of fresh road kill.

Victims of the Smoking Mirror, Tezcatlipoca,

guardian of the fifth sun

whose light unravels the lives it mends

Cesarea Tinajero to no avail.

In the wake of death’s tarantula

on the lips of toothless gauchos

filling the misbegotten with inconsolable alarm.

Each night a cosmos of luminious archers

jaguar with obsidian teeth, whose skin is fog

winding down from a secret lair

The soul’s of dark winged nightingales

Careful to avoid the mesquite thorns

that line each twisted street, to ward off evil spirits,

falls from a bleak fangoso sky

with severed hands and feet.

seeds for armageddon, mixed with cactus,

ascend through clefts in the earth;

in search of anything edible.

monstrous image of a young girl’s belly split in two

stuffed with stones and her own small heart

or a bloated corpse without arms and legs…

impossible to forget as the beheading of a child,

frenzied hornets on an infant’s face.

Each corpse the broken mouth of a yellow sparrow

beyond the outer reaches of Juarez

where too, each dawn

the coo’s of eave hidden doves mix with rustling leaves

the electric thrum of hummingbird wings

The aftermath of horrific dreams

haunting the city whose kinetic portal,

Just outside that part of the world

occupied by the festering wound

slowly cook beneath the sun.

to the edge of yet another abyss,

This is a long poem I wrote a number of years ago after first following the story on my own as it slowly emerged in short, third and fourth page newspaper stories, and then reading the novel 2666 by Roberto Bolano, where part of his plot covers the phenomena.

It had (has) to do with the rapes and murders of women starting sometime back I believe in the mid nineties that were never solved outside of Ciudad Juarez, Mexico (Bolano refers to Juarez as Santa Teresa in the novel… I use both in the poem).

The poem has a lot of dark imagery I play around with a bit: Cesarea Tinajero for instance, (at the end of the first stanza) is in fact a fictional character (a renowned poet) from Bolano’s, Savage Detectives. Tezcatlipoca is an Aztec deity whose spirit animal is Jaguar. He carries a mirror made of obsidian (the jaguar’s teeth in my version) and his iconic image is of fog hovering over water (the jaguar’s body in my version).

Because of the horrific number of rape/murders the ongoing incident has been given its own specific identification by the World Health Association, Femicide or Feminicide. (Perhaps you are already familiar with all of this).

In any case, the title refers to a route in New Mexico with an interesting inquisition story behind it (you can google). I’ve taken the liberty to lift it and have employed it to try and capture the depravity of those drugged out cartel pieces of shit that swarm like moths around opportunities blood soaked candle.

Sonora and Chihuahua are Mexican States that are close to Ciudad Juarez.

The drugs are the drugs…  N