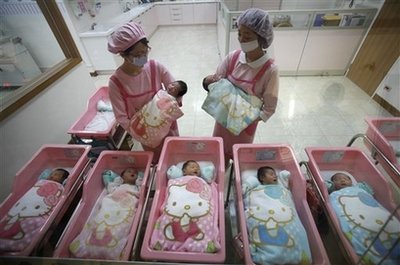 Americans have yet to understand that the only viable employment options left to us are either joining the US army or some form of successful show biz. However, despite this confusion some Californians have chosen to show anger at “maternity tourism,” as this vigilante add indicates, instead of promoting it in the same way the Thai government promotes or supports sex tourism.

Like any rich society, the Chinese has its quirks too. Some Chinese women of means like the idea of giving birth to their child on American soil, forgetting that if their child becomes an American citizen,  back home in China, he will have a hard time accessing free education and free health care. More backward than China, the United States does not offer such social services to its citizens.

To compound this problem, even if parents obtain fake birth certificates for their children, or cheat the Chinese Embassy to get them Chinese passports, their problems will show up later, when the children will not be able to obtain visas to go abroad, to their native country, the United States.

Under these circumstances if seems very likely that the Chinese will give up this trend and the economic boom of “maternity tourism” — at best temporary — will end. In other words, the vigilante’s efforts will further appear lame, unnecessary, and especially ridiculous. Either way, TPV wishes the new Chinese mothers a happy stay on the beautiful west coast.