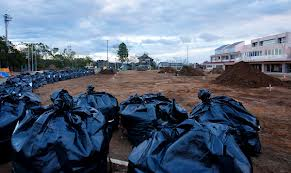 Eastern Europe does not require the poor to read. Only in Japan the poor needs to have access to the Internet to read online adds:

In Eastern Europe,  the poor are treated accordingly. They can either welcome nuclear waste and have their home become a garbage disposal for the EU, or do some other menial work – soldiering on its behalf – NATO, here you come!

Not long ago, nuclear waste came to the poors’ lands. This should be good news for the Ukraine: That job is no longer available; it has long been farmed out to its neighbors to the south.

The European Union does not need any camps yet, either. This is more good news for the Ukraine: otherwise people would have thought that camp production is a national vocation.

For the Ukraine, its attraction is different. Its natural resources are much desired by the West, as well as its vicinity – right next to Mother Russia. So, the poor of Ukraine you can help the West with soldier production. This translates – war on your territory and good TV on the EU territory.

Anyway, poor of the world, be happy. There is work for you: cleaning Fukushima or, if you are from Eastern Europe, you may even get a maid’s room. Temporarily.