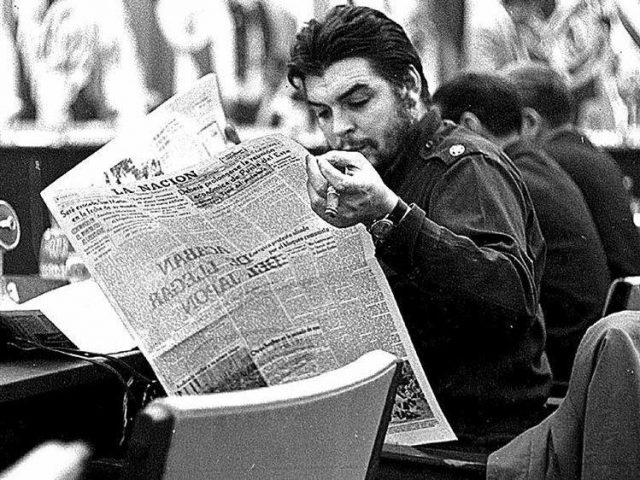 There is a beautiful article in the Paris Review about people who loved life and lived with passion. Education, and a life of reading heavy books apparently had something to do with it.

“There are periods of boredom in the life of the guerrilla fighter,” Che Guevara warns future revolutionaries in his classic handbook, Guerrilla Warfare.

Che recommends that guerrillas carry edifying works of nonfiction despite their annoying weight—“good biographies of past heroes, histories, or economic geographies” will distract them from vices such as gambling and drinking. An early favorite in camp, improbably, was a Spanish-language Reader’s Digest book on great men in U.S. history, which the visiting CBS-TV journalist Robert Taber noticed in 1957 was passed around from man to man, possibly for his benefit.
Che, in fact, was nearly killed in an air raid because he was engrossed in Edward Gibbon’s The History of the Decline and Fall of the Roman Empire.

Literary fiction had its place in the Cuban revolution too, according to
¡Cuba Libre!: Che, Fidel, and the Improbable Revolution That Changed World History, by Tony Perrottet. It fit vaguely into the revolutionary framework. One big hit was Curzio Malaparte’s The Skin, a novel recounting the brutality of the occupation of Naples after World War II. (Ever convinced of victory, Fidel thought reading the book would help ensure that the men would behave well when they captured Havana.) More improbably, a dog-eared copy of Émile Zola’s psychological thriller The Beast Within was also pored over with an intensity that could only impress modern bibliophiles.

Raul Castro, the brother who aged to become a better self

Raúl Castro, Fidel’s younger brother and usually an inspired platoon leader, recalled in his diary that he was lost in “the first dialogue of Séverine [from The Beast Within] with the Secretary General of Justice” while waiting in ambush one morning when he was startled by the first shots of battle at 8:05 A.M.

And of course, there is the American people living in the United States unable to produce a leader. It might have something to do with our education – providing just the idle rich with good private education doesn’t help anybody, especially the idle rich. Look at them. They grow up and tweet.