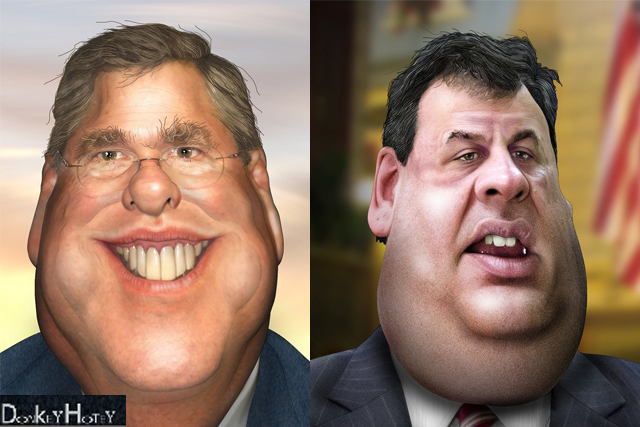 Marquel, TPVs NYTimes Angry Mob Section correspondent was surprisingly happy, so he went to the Tavern on the Green and ordered a six course meal. Then, he checked the news and read slowly Paleo Diet In and Pizza Out, a Slimmer Jeb Bush Seems Intent on Staying That Way.  Marquel was amazed. His college History of Western Civ class would not leave him alone. It was taunting him. The class he most wished he hadn’t missed so much was coming back to haunt him, and the phrase echoed in his ears, brain, and soul.

“Yon Cassius has a lean and hungry look.”

The phrase wouldn’t stop. We analyzed that phrase. Lean. Hungry. Jeb Bush. Lean Hungry. Cassius lit the rebellion against Caesar. He manipulated Brutus into thinking Caesar was about to take over as King. He forged letters. He convinced Brutus that Romans didn’t want Caesar. He molded Brutus into his tool.

This is serious, thought Marquel. In his subconscious Bush feels he needs be more manipulative, more deceptive, more scheming. To be president to Bush, means to be aggressive, active, and without moral anchors. This losing weight bit is his way of becoming what he needs to be.

Marquel decided to take the analogy further just to see what it would reveal. If he were right, Jeb in his new lean and hungry look would provide some Brutus, probably just some Republican brute, to kill Hillary‘s campaign. Cassius after all had Caesar done away with for the principle of Roman democracy. Caesar was on his way to being named king, a terrible violation of Roman politics.

What principle could Jeb have Hillary done away for? And who is his stupid Brutus begging to be fooled into committing the act?

Marquel was stuck. Jeb was at the end of his own lineage, a little Caesar, all cheese. But he could oppose Hillary on the same grounds, saying it was not just Hillary, but next Chelsea. That’s a threat to the Bush’s view that a president should come from a family you’d like to down a beer with. So that’s the  plot.

So Jeb Bush is going to sic Walker on Hillary. And it makes sense. Walker wants to invade everyone, just like Hillary. He’s willing to take any position, like Hillary, that will curry favor. He is Jeb’s Brutus.

As far as Marquel could figure it, assuming Shakespeare is the way to go, and Jeb is already becoming leaner and hungrier, Jeb will use Walker as his stalking dog, and have Hillary torn to shambles by her Republican equal. Once that is done, lean, hungry, Jeb, will march on to victory with what Marquel predicts will be a near repeat of Bush v. Gore.

Marquel was glad for his liberal arts education. Without it he couldn’t make a purely speculative, unsupported flying guess, seem like an informed, reasonable, political prediction.

“I come to bury Caesar, not to praise him” came just a few pages after the lean and hungry part.

That will be Jeb‘s line. The third debate. His last line.

“I come to bury the Clinton’s, not to praise them. It’s time for something new. A Bush!”

Well okay, it is a college education. But there’s not all that much you can do with it.

By MARQUEL: So, Who’s Brutus