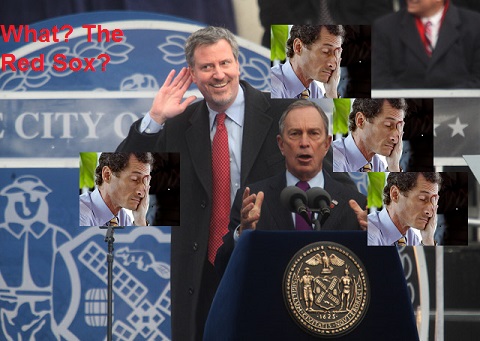 “I saw him [Anthony Weiner] in the shower once, but I was so distracted by the shnoz that I forgot to look at the crotch.”

My friend said this to me. I asked if Weiner was taking pictures of said crotch while in the shower, but for once it appeared that Senor Danger was doing nothing more than literally and figuratively keeping it clean. Weiner plays goalie (and pretty well) in hockey leagues at Chelsea Piers, where I played in a game or two with him years ago, which is how the topic came up—my friend crossed paths with Mr. Weiner (and presumably Mr. Weiner’s weiner) in the showers following a game. Weiner playing goalie is the type of fact that, before more salacious concerns overtook all other Weiner related reporting, was commonly noted (usually in a throw-away sentence meant to give color to a piece, i.e. ‘Weiner, an avid hockey player in his league at Chelsea Piers…’). But it probably never made anyone vote for or against the guy. The case could be quite different with his counterpart (neither a hockey player nor obsessive crotch-shot text messager) who managed to win the primary.

This is because (steel yourselves if you didn’t know) De Blasio is an unrepentant Red Sox fan.Yes, a mayoral candidate in NYC who not only doesn’t toe the Pinstripe line (nor even the Flushing poor-man’s equivalent) but has openly admitted to his continued affection for the team of his childhood, the formerly long-suffering Boston Red Sox. In short, as in so many other ways (if we are to believe his press), De Blasio will be the anti-Bloomberg (it may be instructive to remember that despite having been raised in Brookline, MA, where a Yankees cap is arguably seen as little worse than a Hitler Youth cap, Bloomberg literally switched teams (to the Yankees, of course) without compunction).

What, if anything, does this mean about our likely next mayor? If you want to be coldly rational about it, possibly not much. But then again maybe it is meaningful. What does sports ever really indicate about a person? Sometimes sports can reflect a person’s personality or commitment. Despite being potentially a very trivial indicator, an attachment to a team or the way a person conducts himself on the field (or on the ice in the case of Weiner) can be revelatory. Bloomberg was a Red Sox fan, but it was more convenient to be a Yankees fan; Bloomberg was in favor of term-limits, but it was more convenient to get rid of them. Hillary was a Cubs fan, but she could further her Senate candidacy by saying her favorite AL team was the Yankees; Hillary bashed Obama-the-candidate’s foreign policy credentials, but she could further her career by making nice with him and becoming his Secretary of State. Likewise, everyone is familiar with the type of guy (or girl) who is ultra-competitive in life and work, and brings the same competitiveness to even casual sports activities (Weiner, it is worth noting, is a tenacious and highly competitive goalie—the kind of person who, based on his play, might be willing to compete even in the face of overwhelming odds—hello, 2013 campaign).

So in the case of Dante’s father [youtube id=GgvXniTz7D8 width= 470 height=315] is it so unreasonable to expect that his allegiance to the team that engenders, by far, the most hatred in all five boroughs signifies something important?

Will De Blasio show backbone where a guy like Bloomberg did what was expedient? More than likely we will all find out when he’s in office. But at the least we know he won’t change hats just to get a few more votes, and maybe that does count for something.