Marquel, TPVs NYTimes Auschwitz Section correspondent was weighing himself admiringly, when he read After Social Media Uproar, Zara Ditches T-Shirt That Looks Like Nazi Camp Uniform. After an uproar on Twitter, Zara’s parent Swedish company said it had stopped selling the shirt, which is called the “Sheriff,” and apologized. The shirt was striped as concentration camp shirts were designed, and each had a yellow star exactly as Jewish prisoners were forced to wear. 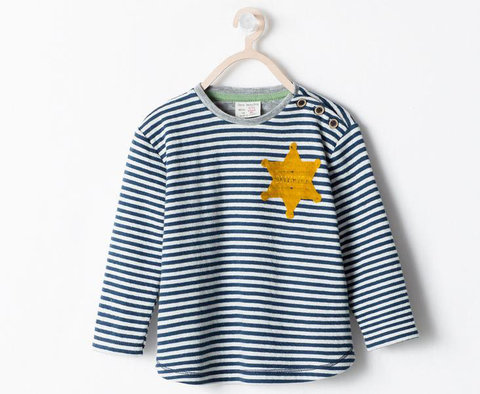 Why Zara thought this would appeal to three year olds is anybody’s guess. Marquel got a hold of the Zara catalog and noticed other peculiarities:
One shirt, called the Gay Paree, was the same basic construction but in place of the Jewish star, it had a pink triangle, as the homosexual prisoners had been forced to wear. Why didn’t Zara cancel that as well?

“Well, we have a lot of gay designers and they thought it was the cats meow!” Said a Zara representative.

“Yes,” she said. “It means the bees knees! This whole retro thing is just so exciting.”

“Yes,” I said, “WWII was so exciting. As I remember you Swedes were kind of neutral.”

“I don’t remember. I’m only eighteen.” She said.

“Sure,” I said, “why remember anyway. It’s mostly bad memories.” She shook her head enthusiastically. I continued on through the catalog. “What are these?” I asked, pointing to some SS silver shoulder ornaments.

“Don’t you just love them?” She asked. “We call them smiley shoulders because they make your shoulders…smile!”

“Okay,” I said, “what about these earrings?” Pointing to unmistakable swastikas.

“But those are Nazi symbols. The smiley shoulders are what the guards wore, and these…”

“Swastikas is what they’re called,” I said,  “The very symbol of the Nazi regime that wanted to rule the world and kill all the Jews, gays, and communists.”

“Oh, ha ha!” She giggled. “You’re talking about the holocaust!”

“Yes, well, in part, they did a lot of horrible things but the holocaust was at the top off the list.” I said.

“If it had happened, yes” she said. “Thank God it was just a fiction like Abba.”

I was catching on. “Abba didn’t happen?” I wondered.

“Of course it happened. But the songs were stories, fictions, just like the holocaust.”

“So the holocaust didn’t happen?” I questioned.

“Of course not. Can you imagine if it had? It would have been ungodly!” She said.

“And where did you learn it never happened?” I asked.

“Well it’s all over the Internet. It was made up. It never really happened.”

“What happened to the six million Jews who used to live in Europe?” I asked.

“All those numbers!” She said. “Whatever they were, they still are. It never happened!” She insisted.

“Well thank God for that,” she said, trying on the swastika earrings and the smiling SS accessories.

“No, not Abba. That was something that happens only once in history. Never again.”

“Never again, huh?” I said, “I’ve heard that before. Listen, drop the earrings and the smilies. It doesn’t go with your sweet face. Or maybe it does….”
***
BY MARQUEL: SpringTime for Zara in History