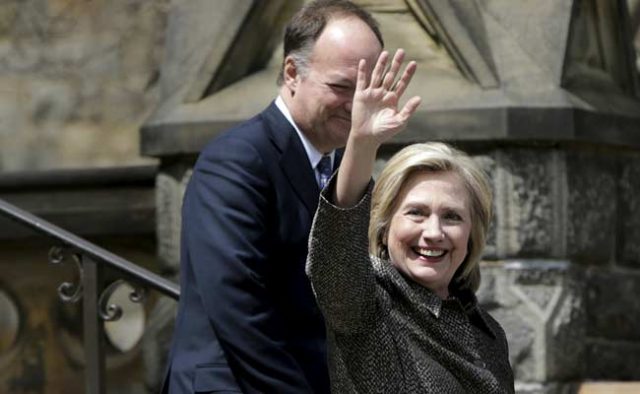 Marquel, TPVs NYTimes Money, Aside From Hillary, Is The Root Of All Problems Section correspondent was uncomfortably happy because he had just been nominated to receive the Bush Award for the most outspoken anti-Hill little rag. The award comes with a $20 gift certificate to DuaneReade. Luckily, he read Cash Flowed to Clinton Foundation as Russians Pressed for Control of Uranium Company, and he decided he could not be compromised so cheaply by the Bushes. He refused the honor and then started looking at the bare facts.

A Russian company controls one fifth of American uranium. To do that they had to get approved by a committee on international ownership. Who was on the committee? Hillary’s State Department. Did it approve the transaction? Yes. Anything more? Well Hillary received a half million dollars to speak to a Russian group, her biggest or next biggest speaking fee ever, and her foundation received something like one hundred million in donations and pledges from the company or its friends and officers.

One hundred million to sell our uranium to the Russians. And it’s all Bill’s, Hillary’s, and Chelsea‘s money now.

Marquel has no position on Hillary‘s candidacy, except of course that we haven’t had as dishonest a candidate since Richard Nixon. But most Americans expect dishonesty from their President so Hillary would certainly satisfy their expectations. On the other hand what about this influence peddling. We haven’t had that much in such amounts in presidential politics since Teapot Dome and that’s almost a century ago.

Marquel had to consider this. And to talk to somebody. Who? He’d had two or three talks with Hillary already this year and she always left him with the feeling he should run home and take a bath in bleach and some strong bases like NaOH.  No he couldn’t do that again. What about Chelsea? Marquel had never met her. Genetically she must be as big a liar as her mother, but she’s younger and might not be as good at it.

Chelsea was not hard to contact. The Clinton handlers want to get her out there, so there she was before me. We had small talk (she said, “hi,” and so did I). Then I asked her if she thought the Russian deal was as bad as it looked.

“At first blush it appears bad, but unless you’re a committed partisan, I think it’s an ant in a molehill.” She said.

“Good answer,” I said. She smiled broadly. “But wrong, I’m afraid.” She looked disappointed and deflated.

“Why in the world?” She asked.

“Because of the nature of conflicts of interest. Do you know much about it?” I asked.

“I’m a university graduate. Of course I know about conflicts of interest. My mother didn’t get paid for this vote and there’s not a shred of evidence, nor even a suspicion, to the contrary.” She said.

“Good answer,” I repeated but this time she was ready, so I continued, ” You understand that conflict of interest embraces more than wrongdoing. It also includes, perhaps the majority of it, the public’s perception and public confidence. Don’t you think that many people would look at these facts and think that perhaps your mother was influenced by a half million dollars in her pocket and a hundred million in the Clinton Foundation?” I asked.

“They might but the facts are clearly to the contrary.” She protested.

“But didn’t we agree that the facts of wrongdoing are not the center of conflicts? That the appearance is what we want to avoid to maintain trust in government?” I asked.

“Well yes. But that doesn’t answer whose perception is decisive. I would think that the perception of the main actors, in this case my mother, should be decisive. And her perception, as well as her knowledge of the facts, is that there was no conflict.” She said with a typically crooked Clinton smile.

“You realize your unorthodox understanding of the doctrine destroys it entirely. You just defined away conflict of interest and replaced it with the protests of the conflicted parties.” I said.

“Of course not. Tell me. Why are you interested in this?” I asked.

“I’m really not. I find it terribly tedious. My parents are always doing things like this. I just want to have fun. Running for president is fun. Being president is even more fun. I’d like to be president.” She said.

“And your mother’s presidency?” I asked.

“Oh she’s had her fun. It really isn’t important to me.” She said.

“I don’t think that should disqualify her, but who really cares, right? She’s had her fun. I want to have some fun.” She said.

“Are you declaring your candidacy now?” I asked.

“Oh no. Just that I want to have fun. As much as my parents have had.”

She looked suddenly super serious and paused. “You know you’re absolutely right. They had a ball up till now, and continue to. I can’t imagine when it’s my turn that it’ll be nearly as much fun.” She lamented.

I didn’t know what to say. “Still, that’s politics.”

“Good move,” I said, with appreciation.

By MARQUEL: The Best Is Still to Come