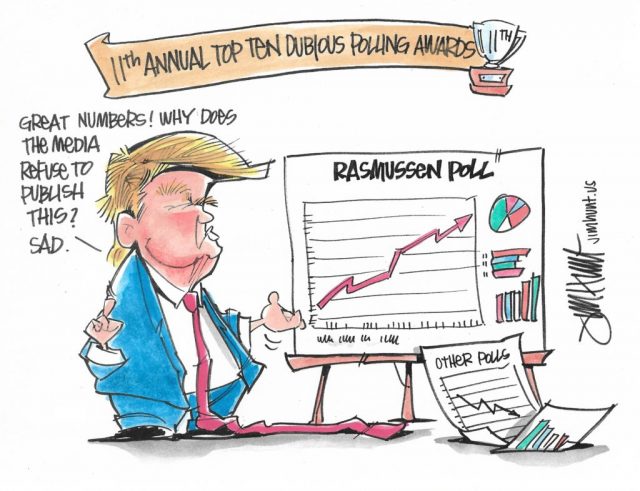 That news is entertainment for the bloated belly is neither fake nor true. Shaking it, come Rasmussen Polling Reports – pure arithmetic bewilderment. Shock and awe. They build trust on the path opened to us by the lovely incompetent George W. Bush and his strong Dick-man Cheney; true dynasty builders, whose heir is Papa Doc Trump (Daddy Tump, to his human aberrations called offspring). Papa Doc Trump, the incompetent bully whose outrageously corrupt behavior has all gentiles by the balls, is the beneficiary of a most recent Rasmussen Report.

We may live in a state of Kool-aid bewilderment, where the President and his pose are for sale, and the most corrupt regimes take turns buying them, but the data says it ain’t so. There is Trump Heights in the Golan Mountains. Next, I suppose there will be a Trump Cemetery franchise in Iran, with nothing, but tasteless tombstones. But, is this true? Who can tell?

Rasmussen Reports can and here is what they say about the state of happiness in our old U.S. of A.

With unemployment for black Americans at an historic low, voters continue to believe President Trump has been better for young blacks than President Obama.

If you wonder who’s the source, here comes the news:

A new Rasmussen Reports national telephone and online survey finds that 33% of likely U.S. Voters think life for young black Americans has gotten better since Trump’s election. Slightly more (36%) say life is worse for young blacks now, while 22% rate it as about the same. These findings have changed very little from a year ago. (To see survey question wording, click here.)

If you don’t understand the numbers, here’s the legend: “likely Republican voters.” How come?

Whose phone numbers do Rasmussen Reports use? Those available to their owners: Likely registered Republican voters. Who knows this? Everyone who keeps tabs on Scott Rasmussen (founder) , or follows the news on the Rasmussen Reports, including,

After the 2010 midterm elections, […] Rasmussen’s polls were the least accurate of the major pollsters […], having an average error of 5.8 points and a pro-Republican bias of 3.9 points […].

Thus, if only 33% of the likely registered Republican voters believe their life is better under Trump, what do you, TPV reader, believe? Don’t say it out-loud; you may faint. Think it in solitude.

For the rest of us, if things for Blacks are going so well in America, imagine how terrific they must be for Hispanics, especially those kept in cages at the U.S. / Mexico border, and who get food and shelter on our tax-paid money! Not to mention the whites Trump would refer to as “penniless white trash”, if anybody cared to probe. They are so desperate, that believe a fat bold guy with a hair-loss complex does a dime (euphemism) about them, just because their common lack of pigmentation.

People, don’t be fooled. Let’s back it all up by numbers. Rasmussen numbers.