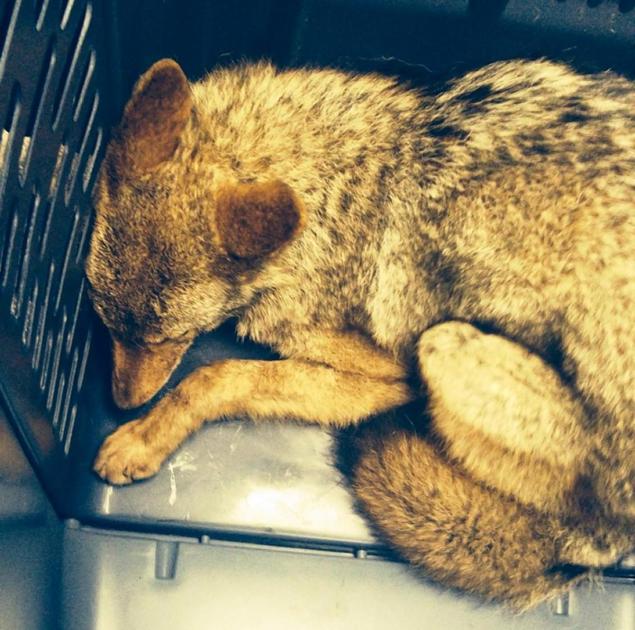 Marquel was walking his pet squirrel, when he stopped to read that NYPD nabs coyote in Manhattan near church.

The cops spent several hours trying to catch him before finally calling emergency services which tranquilized the predator with a dart laced with human tranquilizers. Most of the cops confessed fear at being bitten or attacked.

“This was full grown, big, strong,” said one, explaining why they stood back until it was safe to approach the beast.

Marquel was curious about the difference between how the coyote, a dangerous animal fully ready to kill, was treated and how innocent unarmed New York citizens have recently been treated by the same NYPD.

Marquel first question was, “why didn’t you shoot him?”

“Are you kidding? He was a dog. A wild dog but a dog. I couldn’t kill an innocent dog.” Said one cop, the one that finally slipped the restraining noose over the unconscious animal’s head.

“Well then,” said Marquel, thinkng over recent events,”why didn’t you get him in a choke hold?”

“You clearly don’t understand choke holds. First of all , you’ve got to get close enough to get a head lock on the suspect. This animal was running all around. But more importantly, choke holds are forbidden in the PD.”

“Even on animals? Are you sure?” I asked.

He put his hand to his head and laughed, seeming uncomfortable. “You know,” he said, smiling broadly, “I really don’t know. But I’d say if you shouldn’t do it to a human, most of us wouldn’t do it to an animal either. It can kill so easily.”

“What about a taser. Why didn’t you tase him?” I asked.

“That’s another two things you don’t know. Tasers shoot medicine. But there’s two problems. It’s not really dosed for an individual suspect. Too much and it kills. So the dose is low for humans. But maybe fatal for an animal.”

“So you couldn’t take the chance of inadvertently killing the suspect?” I asked.

“Not really a suspect of course, but yes. And secondly, tasers aren’t accurate. They routinely hit the wrong person. So we have to be careful.” He said.

“So basically you couldn’t shoot for fear of killing an innocent coyote, you couldn’t taser him because it’s inaccurate and not dosed individually, couldn’t act quickly without endangering the animal or the surrounding public, couldn’t use a choke hold because you’d have to catch him first and had to wait an hour or so until a unit trained in safe capture could be called.”

“That’s about the size of it,” he said, tipping his hat to me.

“What color was this dog?” I asked.

“Oh…sort of straw colored.” He said.

“More white than black or more black than white?” I asked.

I shook his hand, congratulated him, and added, “I hope all your future captures are as carefully planned and safely executed.”

I saw some dogs go by but they were safely on leashes.

By MARQUEL: The Chelsea Coyote Story