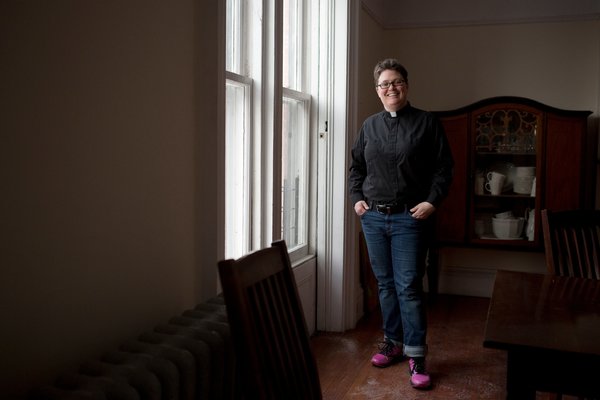 Marquel, TPVs NYTimes Each To Her Own Section correspondent, was eating a little bit of this and a little bit of that when he read New York Fire Dept., Diversifying Ranks, Is Set to Swear In First Lesbian Chaplain.

The Rev. Ann Kansfield of the Greenpoint Reformed Church in Brooklyn is also the first female chaplain in a department that for decades resisted efforts to diversify it. Marquel looked at her picture and could see why her family were all in the fire department. She is a big woman and her father, brothers, uncles, and so on, are probably even bigger. One look at her and you say,

But then there was this lesbian deal. How did that fit in? Marquel called the department and went downtown to talk with the higher ups.

“We’re very proud that the department has moved so far. Not only a woman but a lesbian too,” said the captain.

“You sound like you just shot a deer  Not only was it a ten point buck, but it was pure white.” I said.

“I don’t understand. Don’t you like that she’s gay? What does deer have to do with it. I don’t even hunt. But many firefighters do.” He said.

“Well it sounds like a trophy wife but in this case its a trophy minister.” I said.

“Well then what does it matter that she’s gay?” I asked.

“Diversity! She’s a unique and valued addition to the department.” He said.

“Let me put it this way. What if she were straight? Would she have been hired?” I asked.

“If it doesn’t matter why was she announced as female and gay?” I asked.

“Okay let’s change this a bit. Do you think that she will be sought out by gay firefighters?” I asked.

“What gay firefighters?” He asked.

“Aren’t there gay firefighters?” I asked.

He turned to face me and demanded, “Who?”

“Well she’s a minister. A chaplain.” He said.

“But she’s also a fire department captain.” I said.

“I’m trying to figure out how her sexuality enters into her work. Do you think she’ll be sent to fires in Chelsea, for instance?” I asked.

“But I mean specially because it’s a high gay area. Gay fires, I suppose,” I said.

“There’s no such thing as a gay fire,” he said.

“A few minutes ago you weren’t even sure there was a gay firefighter. So maybe gay fires exist also and you just don’t know.”

“And that’s where you’d send this new chaplain, right?” I asked.

He looked at me. Speechless. I felt guilty. I’d worn him out. Not much of a firefighter.

By MARQUEL:  The Melting Pot