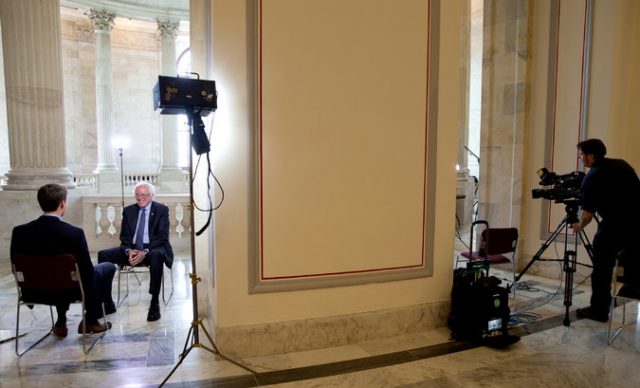 Bernie Sanders Announces He Is Running for President, read aloud Marquel, TPVs NYTimes Who? Section correspondent, and Gail Collins responded by writing a tepid op-ed piece in the Saturday Times.
Bernie who? Marquel had an uncle Bernie. He called him.

“Uncle Bernie, are you running for president?” Marquel asked.

“Of course not, Marquie, why would I do that?” He asked.

“Well I heard you were.”

“Marquie, you know our whole family is communists. We couldn’t win a lottery, let alone an election.” He said.

“But this Bernie is a communist too. He said so.” Marquel insisted.

“Yes indeed but not every one knows that. This is still impossible. Have your ears cleaned out. Say hello to your parents.”

So it wasn’t Uncle Bernie. Who was Bernie Sanders? Where’d he come from? Maybe he’s fictional, made up by Hillary so he can eventually cast his supporters and support to her to lock up the left wing. But that can never happen because Hillary doesn’t understand what the real left wing really is. Who to talk to about this?
I stopped in at Socialist Headquarters.

“Yes Bernie’s with us. What do you want?” they asked.

“I was wondering what his platform is.” I said.

“Two reasons. He just announced so it’s hard to get him. Second I think the party might give me better indicators.” I said.

“Hmmm. Interesting. Well I can tell you what we stand for.” He offered.

“Tax the rich. Use it for better schools only in underserved areas to equal things out. Halve the military or ideally liquidate it. Use the money to build a brand new America. Restrict executive income to thirty times the lowest paid employee. Gay marriage any marriage. All people are absolutely equal. No money in politics.  At all. modest federal subsidies of candidacies.”

“Wait wait wait. Is that left wing?” I asked. “Why do people call Hillary left wing if she doesn’t support even one of those policies?”

“I really couldn’t tell you. Clearly somebody has his wings confused.” He said.

“The Times said Bernie couldn’t hurt Hillary because there’s little room between her and the left. Can sharing nothing in common really leave little room?” I asked.

“Honestly I really don’t know. We don’t talk like that. It sounds like a different world. If you don’t subscribe to what I just said, you’re not left, you’re  right.” He said.

“Well if there’s all that space in there that Hillary isn’t close to occupying, do you think Bernie could win?” I asked.

“Yes I do. It’s a long shot but not impossible. The people want everything I just listed. Corporate America doesn’t. Seems ike an easy choice to me.” He said.

“So you support him?” I asked.

“I want a real leftist. One who knows how power is really used.” He said.

“You mean like Mao?” I asked. “All power comes from the muzzle of a gun?”

“All power and the only power comes from the muzzle of a gun.” He asserted.

“I tend to agree with you but I hope they give Bernie a chance.” I said. “It’s too scary otherwise.”

“Anybody promise you life wouldn’t be scary?” He asked.

“Don’t be afraid. We’ll all be in it together.” He assured me.

I didn’t feel assured. But I was afraid of Hillary.