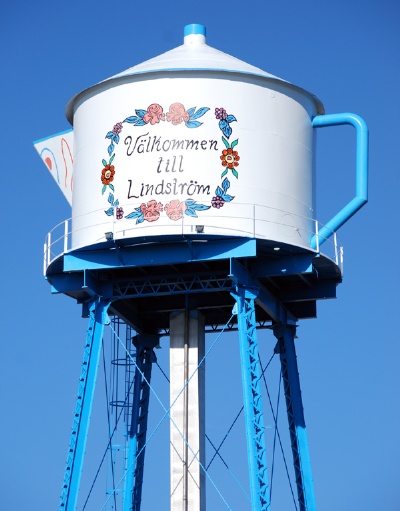 Minnesota Town With Scandinavian Roots Gets Its Umlaut Back, Marquel, TPVs NYTimes Getting Dotty Section correspondent read this morning and got giddy thinking about the town’s new open possibilities.

The umlauts were left out when a new state law banned them from street signs. The governor, in emergency session, had them put back in.The town, Lindström, is named for its earliest Swedish settler. Sweden is big in Minnesota with almost half the residents claiming Swedish blood, and thousands of Swedish tourists arrive every year to visit the umlaut-studded environs. In fact the U.S.settlements were actually subsidized by Sweden in the 19th century, and the two nations have of course always been friendly.

But the importance of the umlaut seems somewhat divisive and debated. Some people claim it makes no difference to English speakers. But to Swedish visitors, the pronunciation is so different that some claim many were stranded in Utah trying to find out where Lindström was.

A young Minnesotan explained and demonstrated the difference. To an American English speaker, Lindström is the same as Lindstrom. But the ö, she demonstrated, sounds like aweeoh, with a kind of click in the middle,

“So that it sounds like a herring giving birth,” she explained.

Then she gave another demonstration, mouth open, tongue flapping, pressure building, a kind of painful moaning, that I was waiting to see the baby herring actually delivered by the young woman. At the very least I felt compelled to lead her in breathing.

Even with the different pronunciation (with the correct pronunciation I’m not sure anybody would want to visit Lindström, rather than flee), it’s not clear what difference it makes. Medical experts said that the menstrual cycles of all women in Lindström were upset. But they couldn’t explain why.

So, too, was the cooking of traditional Swedish treats upset by the missing umlauts.

“I couldn’t make my Kringle (a traditional pastry with sugar, nuts, and a rather thick crepe base),” said one matronly resident. “The minute they took off those umlauts, everything burnt. The sugar  blackened and the Kringle was inedible.”

Several stillbirths were reported at the hospital when the umlauts disappeared. Worse, the birth rate dropped precipitously. I spoke to the hospital.

“The umlauts affected something because fertility fell through the floor. I don’t think anyone conceived during that time. Except for non Swedes of course,” said the chief of obstetrics.

“How could that make women less fertile?” I asked.

“The strange thing is the women are completely normal and fertile except for a small shift in their menstrual cycles. It’s the men.” She said.

“No sperm counts?” I asked, knowledgeably.

“Apparently they’re completely potent, and loaded with sperm, just unable to ejaculate. There’s nothing in the books about it, certainly nothing about umlauts.”

“Nothing in the literature?” I asked.

“Nothing but an article in a Swedish journal that refers to a similar phenomenon in an isolated village where all the umlauts were pecked off the signs by immigrant birds.” He said.

“Nothing but wonder. The governor said if the signs weren’t repainted by this week, he’d come out and do it himself.” She said.

“And the Swedish women?” Asked I.

She lowered her voice so I had to lean in to hear.

“They are positively delighted. I’ve never seen such a sexually happy and satisfied cohort. It’s basically withdrawal on a massive scale. No fear of pregnancy, assurance of satisfaction, and constantly interested partners. It’s a dream come true. A Swedish dream.”

I thanked her, started thinking about it, and quickly realized I didn’t want to think about it at all.

By MARQUEL: the umlaut of laughter and forgetting