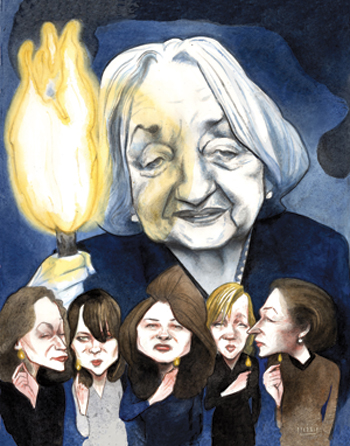 Last Wednesday, January 23, once again Hillary Clinton juggled with her innate incompetence and strong presidential ambition in a much avoided congressional hearing about how her department butchered high level security in Benghazi.

On Thursday, January 24, Defense Secretary Leon Panetta announced that based on a long record of male and female military performance, the military would lift its ban protecting women from being easily killed in combat. They are equally expandable, the Secretary said explaining his decision, and denying rumors that the military had had problems recruiting cannon fodder.

On Friday, January 25, CNN learned that Sarah Palin‘s contract with Fox News media would not be renewed.

On Saturday, January 26, a lot of soccer transfers happened or just leaked out to the press, but I missed them or their meaning completely.

On Sunday, January 27, Daniel Day-Lewis won the SAG awards for ‘Lincoln‘ and mumbled that his life-guiding principle had been “First, do no harm.” Knowing how the actor impregnated and then refused to marry French beauty Issabel Adjani because Arthur Miller suddenly offered the ambitious actor Hollywood if he married Rebecca Miller, we thought to share with you this trivia so Day-Lewis could rewrite his Oscar acceptance speech leaving out the Hippocratic oath, which actors do not need to take anyway.

On Monday, January 28, I came across what could be the quote of the year 2013. It comes from Rachel Steir‘s article on the end of feminism:

I do not think the vagina should have its own biography, although if it must, that book should be funny, sexy, and smart. Maybe someday.

On Tuesday, January 29, the French troops reached the ancient city of Timbuktu and wondered why.