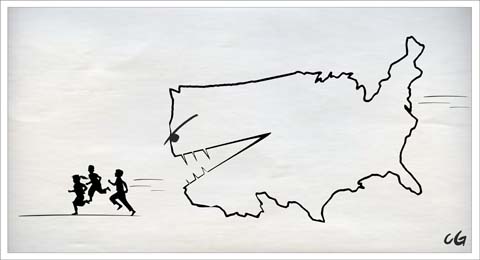 The United States of America is tired of being the world’s Cesar.  To make sure that it can retire, even if no one steps forward to replace it, America makes it clear that only the children of Madoffs (who don’t give a shilling when ashes become us) can get a decent education – “Let only those who can pay handsomely eat cake,” seems to be the new slogan.   For the offspring of the hoi poloi the government offers a career in tragicomedy.  Public high schools develop experimental curricula, where taking one class in something that can be self-taught brings the students double credits.  Let me explain myself.  For example, you learn how to treat acne in a class called cosmetology, and you receive credits for both cosmetology and a second, phantom, class which you have not taken, let’s say chemistry.  To top it all, the ill-famed Jane Addams High School for Academic Careers in the Bronx, where this “double dipping” was recently exposed, has no chemistry teacher.[1]  For the record, no one checked out whether the cosmetology teacher was an avatar or one of us.

But, if we do not, as a nation, care about children of regular means, we do care about dogs.  I mean war dogs.  The New York Times, always on the look out for meaningful news, tearfully reports on its first page that medics in Afghanistan called behavioral specialists in Texas because “[their canine] patient had just been through a firefight and now was cowering under a cot, refusing to come out.  Apparently even the chew toys hadn’t worked.”[2]  Ah, isn’t such animal care quaint, especially nowadays?!  Our army veterinarians call Texas from Afghanistan – a country so devastated by war that to call it Third World would be a euphemism — when their patients are melancholy, but we allow our recession to continue its gallop toward an unclear economic abyss, driving regular folk to madness and despair.  Even when we report the human stories — such as that of Ohioans being murdered for answering fake employment ads on Craigslist — they make it somewhere inside the paper.  The Times people must know that gruesome man-made tragedy[3] does not sell a fancy paper to fancy people, unless it has a veneer of Macbeth to it.

And for the grand finale, here comes a character Federico Fellini would surely have loved and might well have portrayed in his Otto e mezzo: Newt Gingrich.  The least we can do as a nation is to beg Newt to scan his convoluted brain and post the image on some Smithsonian blog.  The fragment below[4] belongs to Newt himself during various monologues directed at people who must have less acumen than he because they stayed until the end of the Newtonian delivery.  Their gist is our children’s economic future. 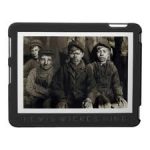 Newt wants to reform our young people using an Oliver Twist mold to which end he offers them the few remaining available jobs in our economy — assistant janitor and assistant librarian.  Though his train of thought is discernible, the source of the money required to compensate these children’s productivity is left obscure. Maybe it would come from his wives, from drugs, or maybe from China.  Hopefully, he will clear up this mystery in the months to come.
Otherwise it will remain a mere American tragicomedy.

“Really poor children in really poor neighborhoods have no habits of working and have nobody around them who works,” the former House speaker told an audience at the headquarters for Nationwide Insurance.

“They have no habit of ‘I do this and you give me cash’–unless it’s illegal.”

Gingrich added that most successful businesspeople he knows started work “early” and made some kind of money when they were kids, whether it was by babysitting or mowing lawns.

“Then we get down to the janitor thing,” Gingrich continued, in reference to his previous comments.  “[I received] letters written that said janitorial work is really hard and really dangerous and this and that.  OK, fine.  So what if they became assistant janitors and their job was to mop the floor and clean the bathroom.  And you paid them.