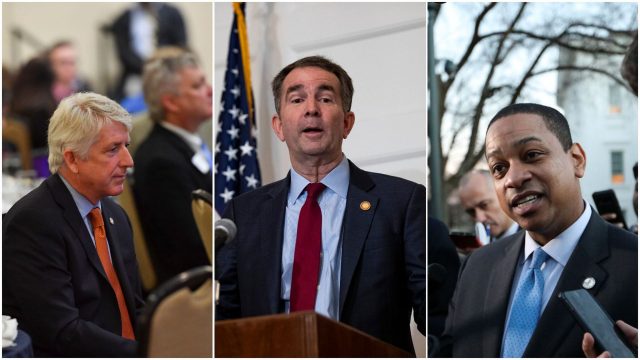 Even the three stooges were carpenters for a day, so, why not these present day Virginian stooges be politicians for a day, or so, the thinking goes.

Fairfax, wearing his own face and clothes, is denying allegations that he sexually assaulted a woman at the Democratic National Convention in 2004. Sadly, Vanessa Tyson, the college professor who performed oral sex on Fairfax in 2004 remembers differently, and it’s nothing to write home about her story.

Were Northam to resign, as many have called on him to do, Fairfax would in theory take over as governor. As of now, though, neither man appears to be planning his resignation.

However, Fairfax is facing increased calls to do so after reports emerged that he said “fuck that bitch” about Tyson in a meeting earlier this week.

Fairfax when he stopped hoping for promotion.

As a 19-year-old college student, I liked to dress up but mostly down like rapper Kurtis Blow, and then I liked to perform including wearing black face, as the whites in my college freely did in those days.

Herring agreeing to speak only on condition of anonymity.

So, what’s to be done Virginia?

Shall we excuse these Stooges on grounds of ignorance and glib? Shall we say that politicians so obtuse in their youth as to dress up in coned sheets or maybe just on wigs and brown makeup have suddenly matured into better beings? Or shall we just say the past has caught up with them and boot them out of office?

I think we should call for early elections, Virginia.

That’s what TPV would do.