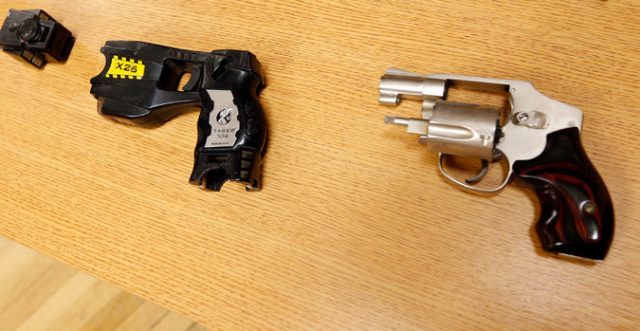 Marquel, TPVs NYTimes Is It a Taser Or a Gun section correspondent was scratching his head when he noticed he was bleeding and he stopped to read Reserve Deputy Held in Killing; Mistook Gun for Taser. Robert C. Bates, 73, a volunteer with the Tulsa County Sheriff’s Department in Oklahoma, was charged with manslaughter. Minutes after the shooting the deputy said,

Marquel wanted to talk to the deputy and gave him a call.

“Could you tell me how you confused a taser which is plastic, with a gun, which is metal and much heavier as well?” Asked Marquel.

“I don’t know. But you know I’m pleading not guilty, and I want to testify.” He said.

“Fine by me. I still don’t know how you confused the two.” Said Marquel.

“No, this is Marquel.” Marquel answered.

“From the New York Times?” He asked.

“No, from TPV. I’m their New York Times correspondent.

“Well this was many years ago and I don’t remember all the details.” He said.

“But this happened just over a week ago,” corrected Marquel.

“Oh that shooting. I used a taser. No, I meant to use the taser but didn’t. Oh I don’t know.  A simple mistake.” He said.

“It’s hardly simple. Guns kill people. The point of having a taser is to avoid killing someone. That’s not a simple mistake is it?” Asked Marquel.

“Of course not. A taser is a lethal weapon. A gun is designed to disable and warn. We learn that.” He said.

“That’s backwards, deputy, the gun is lethal and the taser is not.” Corrected Marquel.

The deputy hesitated. I could hear his heavy breathing. “Gun is lethal, taser is not. I think that’s right. That might explain the confusion.” He said.

“What explains the confusion,” I asked, a bit confused myself. The deputy seemed nuts, but most deputies seem nuts to me.

“I forgot which one was lethal.” He explained.

“Wait a minute.” I said, trying to pin him down. “You’re saying you didn’t stupidly use the gun by mistake? You meant to use the gun but merely forgot that the gun was the lethal one?” I asked.

“Well of course. I’m not stupid and I’m a good lawman. I wouldn’t use my gun when I meant to use my taser or vice versa. I just forgot which one did what.” He said.

“Well I think when you go to trial, the jury will agree that it’s an easy mistake to make,” I said, trying to encourage him to talk.

“It’s not me that’s going to trial. It’s that black bastard I shot.” He protested.

“But he’s dead. You killed him. They’re charging you with a crime.” I said.

“Well doesn’t that take the cake. Back in the day, they’d give you a medal and a big dinner for shooting a colored. This isn’t the good ol’ days, I guess.”

“It sounds to me like neither were the good ol’ days.” I said. I hung up gently.

By MARQUEL: What’s Good about Old? Not Much