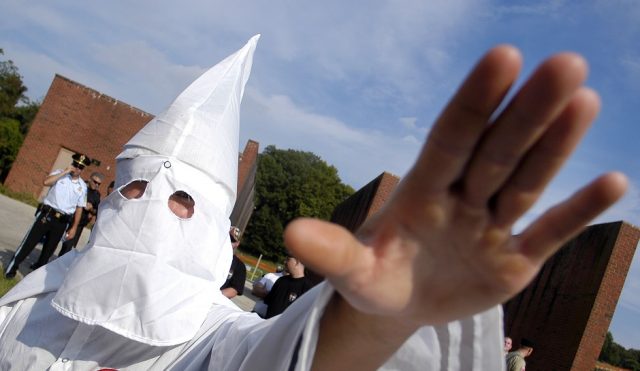 At first TPV thought the news contained a typo.

Why would two white racists stab another white racist? Had they all three fallen in love with the same métisse? Pardon our French thinking.

And then it all became clear. Hagen, the “Grand Dragon,” recently hit the California KKK glass ceiling in the shape of Baker, “The Imperial Wizard.” In order to surpass the Wizard and become Drizard or Dragon Wizard, the best of all, Hagen had to find another Klan member to stab while drunk-attending a white parade.

Now, since Donald Trump‘s election, there are daily KKK parades in South and North Carolina. Equally so, KKK stabbing happens all the time. Only not of Klan members. And unless the remains become bonfire logs, nothing really is known or gets out.

So, Dillon was lucky that the ambulance found him. That’s because Hagen needed Dillon’s stabbed figure on his Instagram account with the caption “told you so!” to be considered Drizard.  And when he did it, the local Sheriff, a follower, had to intervene. Laws are laws, even in the Carolinas.

As the Bard said,

all is well when it ends well and the stabbing’s inside the klan.