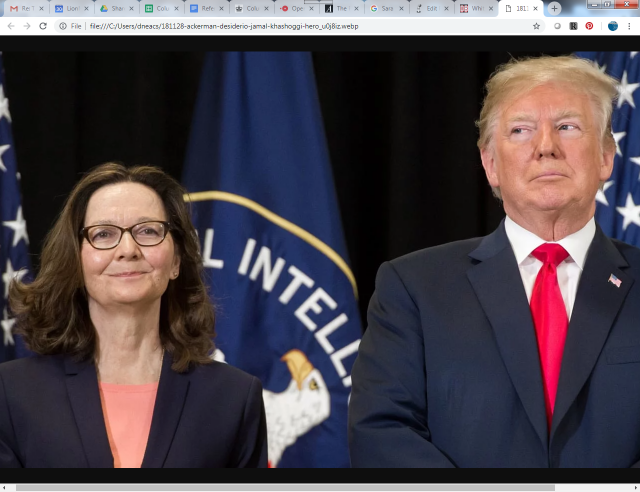 What do Mattis, Pompeo, and Gina Haspel have in common?

Other than lack of scrupules, insatiable ambition and a rather unorthodox complexion?

They all promote the Mohammed bin Salman al Saud package of American values.

They are not married to Barbie Princesses, are they?

No. Mattel, Inc. releases only a limited number of Barbie Princesses and they go for those at the very, very top.

Then, maybe they encourage killings as an afternoon, early evening, athletic event?

No, they are not the athletic type. Putin is.

The three you mentioned would rather promote them for reasons of patriotism and national values. Also, they detest retail, one Khashoggi at the time, as inefficient. They would rather go in bulk: all Yemenites at once, for instance, as Mattis recently wrote in The Wall Street Journal.

And that done remotely.

But available on Skype.

So, Khashoggi’s dismemberment could have been watched via Skype, or FaceTime.

Maybe something more secure. Skype records such events and sends them to the NSA, so Gina would have been able to watch it too, not only listen to the tape.

So it is correct to say that there is “no direct reporting” connecting anybody outside the four Turkish walls to that killing.

And going back to Gina, why is she still in the bathroom?

She still tries to see if she could escape through the bathroom window.