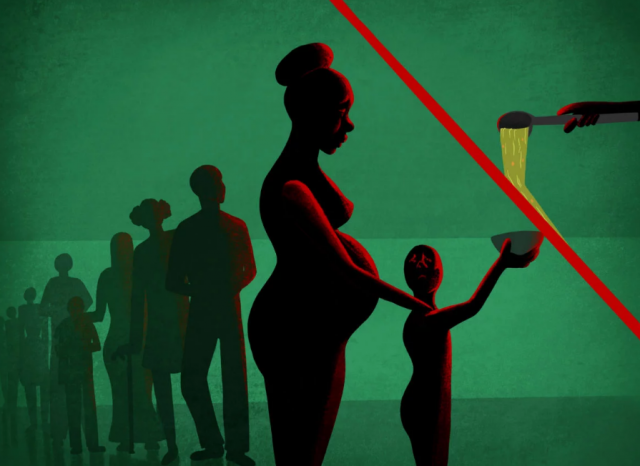 The rumor mill has it (according to Sasha Abramski) that Trump is upset: he brazenly lied when he claimed he is the Well-Off-in-Charge, worth $9 billion. Trump inflated his wealth. The really rich handful of people (the genuine well-offs) laughed at him. And he blames Forbes‘ calculating formula for the mishap (Forbes says his real worth is $3 billion). That gave Stephen Miller an idea.

Now, that is not serious, because the number of hamburgers that Trump can ingest at once does not change whether he is worth $3 or $ 9 billion.

However, if Stephen Miller has his way, that’s a different story. If the Trump administration redefines the poverty line, that would affect the needs of the tens of millions of economically insecure and borderline destitute Americans. The poor would become so poor they would choke on their own spit. And if Trump‘s self aggrandizing style is an indication, the poverty line would be redefined to make the poor less poor and more affluent. How? Making it ever-harder for people to prove their neediness and to qualify for public assistance. They would apply color to their cheeks instead of doctor’s appointments. And they would look more like Ivanka, Erik and Don Jr.: made-up.

Bad Acts, though Shallow, Have Depth

Margaret Thatcher’s Conservative Party government redefined unemployment in the United Kingdom in the 1980s. Thatcher removed elderly workers from the unemployment data. She also only had counted those who were claiming unemployment benefits. Magically, the UK had far smaller unemployment.

But, Trump‘s predecessor in playing with the fate of the poor is none other than Bill Clinton, whose wife gifted us Papa Doc Trump. Bill Clinton shamelessly claimed credit for reducing the number of people reliant on welfare after the 1996 welfare reforms.  What his reforms achieved was to dramatically curtailed eligibility for cash welfare payments. Fewer applied, ergo, fewer needed the payments, Bubba suggested.

Criminal because It Is Legal

Now, if TPV says we are The Post, we would boast like Trump. And like Trump‘s made up fortune claims, few, aside from us, would care. However, when it comes to people NOT being able to eat by claiming access to states’ food stamps programs, or people NOT being able to afford medical care, because they are not sufficiently destitute, that is wrong. That is worse because it is done so America can continue to provide its corporate tax subsidies to the wealthy. That is criminal in a manner that no criminal code can punish, because … it is legal. And conscience, that’s a game neither the Trump administration, nor the American Congress are keen to play.

So, aren’t we blessed to live in a nation of well-offs on paper?

Mothers: You can live with them and you can’t be without them.