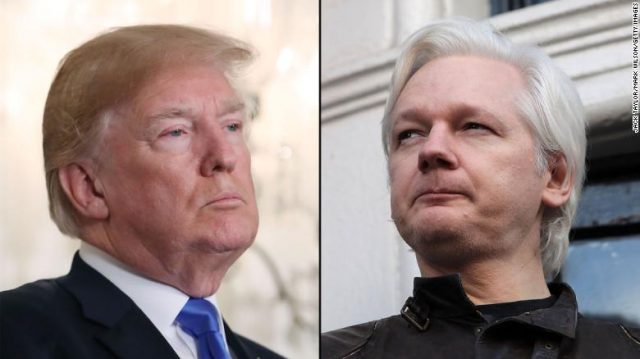 In an unprecedented move, the Justice Department has indicted WikiLeaks founder Julian Assange on 17 charges of violating the Espionage Act for his role in publishing U.S. classified military and diplomatic documents exposing U.S. war crimes in Iraq and Afghanistan.

The documents were leaked by U.S. Army whistleblower Chelsea Manning. A former Army intelligence analyst, Manning issued a statement from jail slamming the Trump administration for accusing Mr. Assange of violating the U.S. Espionage Act by releasing classified U.S. military and diplomatic material she admittedly provided to WikiLeaks for publication.

“This administration describes the press as the opposition party and an enemy of the people,” Manning said. “Today, they use the law as a sword, and have shown their willingness to bring the full power of the state against the very institution intended to shield us from such excesses.”

On August 21, 1917, some two months after America’s formal entrance into World War I against Germany, the United States Congress passes the Espionage Act.

Enforced largely by A. Mitchell Palmer, the United States attorney general under President Woodrow Wilson, the Espionage Act essentially made it a crime for any person to convey information intended to interfere with the U.S. armed forces prosecution of the war effort or to promote the success of the country’s enemies. Anyone found guilty of such acts would be subject to a fine of $10,000 and a prison sentence of 20 years.

The Sedition Act of 1918 imposed similarly harsh penalties on anyone found guilty of making false statements that interfered with the prosecution of the war, as well as insulting or abusing the U.S. government.

Could this be the catch and the next step? Insulting Trump would be an act of sedition.

Hey!!! Anybody listening out there????

If Assange Gets Convicted, then Any Undesirable Can, too.

The Espionage Act has never been used to prosecute a journalist or media outlet. The new charges come just over a month after British police forcibly removed Assange from the Ecuadorean Embassy in London, where he took asylum in 2012.

Initially the Trump administration indicted Assange on a single count of helping Manning hack a government computer, but Assange faces up to 170 additional years in prison under the new charges—10 years for each count of violating the Espionage Act.

“It is a grave threat to press freedom and should be cause for concern for journalists and publishers everywhere.”

This is the beginning. The overture. The Sedition is what matters. Would any of our corporate outlets take a position? The New York Times? The Washington Post? CNN? Bezos, today’s Assange, tomorrow’s you. Are you going to wait for that? TPV cannot fight your battles alone, big boys.