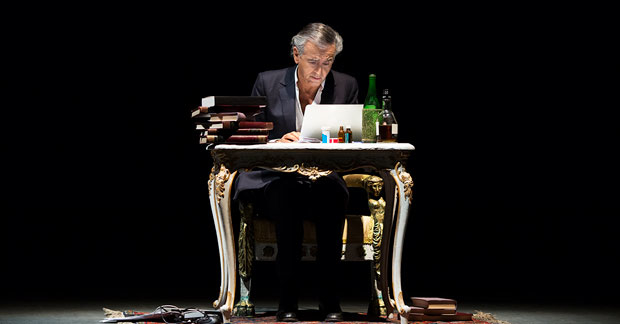 Not that I wouldn’t like to be able to share a cup of Cuban coffee with him. We ain’t friends because he doesn’t have what I look for in a friend. Take last night’s birthday bash for French bonne homme vivant, public intellectual by his own word, M. Bernard-Henri Lévy. He and Adam Gopnik are good friends. Gopnik’s voice was heard in a pre-recorded conversation played during the bash: Looking For Europe, at the Public Theater.

By chance I sat next to Mr. Gopnik. He, unlike me, sounded pleased with the result, and also unlike me, he could have done something about the show so more of us would have liked it.

America has gotten itself a few public intellectuals and even more pundits. We have eviscerated the meaning of public intellectual as Hannah Arendt (among others) envisioned it —speaking truth to power — when Walter Lippmann established punditry – the art of lecturing the public in the truth of the day as seen by the men power entrusts with a microphone, in public.

M. Lévy is neither a pundit- few know his name outside Quartier Latin or the 6th arrondissement of Paris. A snob, I buy all his books and then forget to read them: too much to do, too little time to waste, ergo, let’s hear him talk for two hours and see what I have missed.

M. Lévy believes he is a public intellectual.

At 70, to delude oneself is quaint, what else is left?! And probably Adam Gopnik felt the same when he refused to tell his friend, M. Levi, that his show was unfocused, reactionary against his own desires, and all together lame.

M. Levi doesn’t like U.S. Sen. Bernie Sanders and Noam Chomsky, the only interesting politician and, respectively, public intellectual of our times. I don’t know why the dislike, M. Lévy never told us. That, I would have been really interested in learning, because that was among the very few things for which a mere Google search would have been useless. Most of the material in M. Lévy’s self-congratulatory show was googalable.

And here is the mystery : why would M. Lévy call our dictator-in-chief, “Baby” Trump? What babies does M. Lévy  know that cage other babies, removing them from their mothers and destroying their lives the way Nazi Germany did or more recently accidental empires are doing it in UN camps? Trump is America’s White Supremacist-in-Chief, cher M. Lévy, and calling this cancerous tumor by the endearing term, “Baby” Trump, humanizes him. Why do it?

At best, it’s lame and out of touch. At worst, you haven’t made up your mind.

And, by the way, America of the One-Dollar-Bill, that you evoked last night, M. Lévy, was a tragedy in need of much corrective, democratic work. The three lines from Virgil’s Aeneid, you mentioned gave the mystery away. It was slavery for the benefit of a few funny-looking wigged men wearing Bermuda shorts.  Greece repudiated that limited democracy thousands of years before our Founding Fathers engaged in that form of government. It’s time we deplore that rather than give it some meaning it never had.

The Americas have always been multicultural: Some form of Western European Civilization transplanted on the oral cultural tradition of Native Americans, a hybrid reimagined by the African Culture of the exploited slaves as well as the potpourri of sweat of world’s tired, poor, huddled masses yearning to breathe free. That is America’s past,  M. Lévy, if you care to lecture on its future. Everything else, an uprooted, relocated Western Europe, is someone’s confused dream.

And that is why Mr. Adam Gopnik is not my friend.