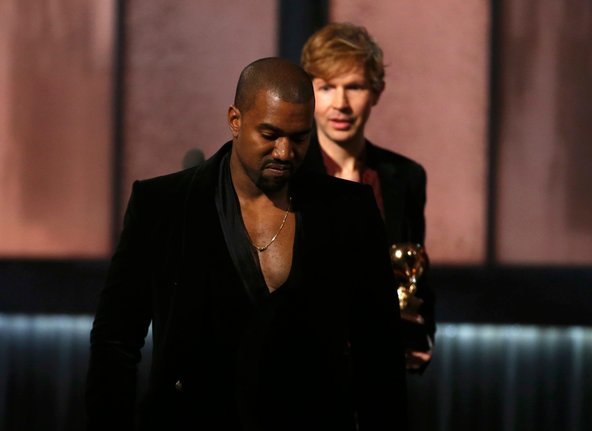 Marquel, TPVs NYTimes Ain’t Have All The Shit to Print Section correspondent, was farting musically when he read  Kanye West, Beck, Papa John and Other Grammy Awards Stars.

Marquel thought the article ain’t have the details right. Kanye and Beck ain’t have a good relationship but when it comes to music you ain’t have to agree, as everyone knows. In popular music, even the stars like  Carole King ain’t have the right skin color to write real r&b.

So this year’s ceremony was fraught with tension between musical ability and a complete lack of human intelligence. Marquel spoke to Kanye, as best he could but found the going tough because Kanye ain’t have much of a vocabulary and seems to hate Beck more than he likes pizza, which he mentioned several times.

“Kanye, who do you think is the greatest musical talent in the world right now?” I asked.

“I ain’t have no rhyme. Dat for babies and othe crappers. Dey ain’t have space for other rappers.” He said. “Where da pizza?”

“But isn’t rapping all about rhymin?” I asked.
.

“Well then you must like Katy Perry. She has that peacock song. Don’t you think she deserved something? Maybe a special lifetime Super Bowl award?” I asked.

“Shit. She ain’t have no Super Bowl. Beyoncé has dat. Hey, where da pizza?”

“Iggy in charge. She ain’t have no pizza cept for Beyoncé and I.” He said.

“Tell me why you’re so upset about Beck. He’s a nice sincere boy.” I said.

“Dis is about music. Not pizza. Beck too white. He ain’t have music in him. He have pizza. Where da pizza?” he asked.

I thought I should give up. There was no Iggy and no pizza. Clearly this man wanted his pizza. I asked, “Kanye, if I saw Beyoncé at the door or Iggy with some pizza which would you choose?”
He was silent. I repeated my question with no reply. I repeated it a third time.

I was hungry. “Kanye man, I ain’t have no news of Iggy or the pizza. But I be hungry.”

“I ain’t have nothin neither,” I said. I couldn’t speak English anymore. “You ain’t have nothin. It be noon. Let’s eat.”
We went to a local pizzeria and watched for Iggy. She ain’t come. We ain’t have no more hungry. We be set.
***
By MARQUEL: “The fault, dear Kanye, is not in music, but in yourself. And the tonedeaf.”  Big Will