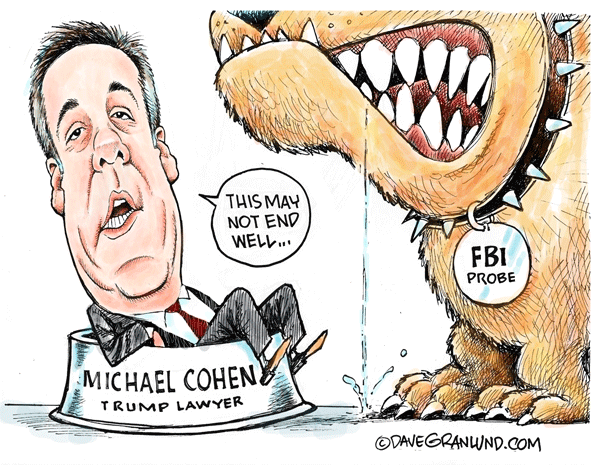 Worried About the FBI? No.

The night after the news broke about the FBI collecting material from Trump lawyer Michael Cohen’s office and hotel room, a friend who is a prominent social scientist and a persistent liberal, asked me: Do you have any qualms about the FBI poring through a lawyer’s files?

My honest, spontaneous answer was: No.

On hearing the news about the warrant issued for the search of Cohen’s premises, I could honestly say that I’d felt nothing but joy that laws are being enforced by an apparatus unswayed by the gold-plated would-be king in the White House.

My considered answer was again: No qualms. None.

I am eternally mindful of the depredations of the FBI in the 1960s and early 1970s. I am steeped in the knowledge that the FBI conducted illegal, depraved wiretaps of Martin Luther King Jr., and that a high FBI official, in 1964, sent to King’s home an anonymous letter not so subtly suggesting that King commit suicide. The letter was accompanied by tapes of King’s extramarital sessions. It ended: “King, there is only one thing left for you to do. You know what it is. … You are done. There is but one way out for you. You better take it before your filthy, abnormal fraudulent self is bared to the nation.”

I am equally mindful—thanks to the research of the historian Arthur Eckstein—of the FBI’s readiness, in 1970, to open concentration camps for American radicals.

So why do I feel no qualms about the FBI excavating Michael Cohen’s files? Because J. Edgar Hoover’s FBI is not the FBI of the 21st century. Because in the current circumstances, the FBI operates as a professional civil service enforcing the law. In the case of the Cohen search, the agents had a lawfully issued search warrant.

Is the FBI above suspicion? No. There is a notable exception to its 21st-century by-the-book standards: The New York City FBI claque that operated with Rudy Giuliani’s connivance to pile up dirt against Hillary Clinton during the 2016 campaign. (Giuliani’s “most remarkable claim,” The New York Times’s Jim Dwyer reported on November 3, 2016, “is that he has a pipeline into the Federal Bureau of Investigation and that agents tell him they are ‘outraged’ that they have not been able to bring Mrs. Clinton and her husband, former President Bill Clinton, to justice.”) Arguably, the lobbying of this claque weighed on James Comey when he decided to intervene to damn Clinton by releasing, on October 28, 2016, the nothingburger about Clinton’s emails found on the laptop computer of Anthony Weiner, the disgraced former husband of Clinton aide Huma Abedin.

But I am aware of no shred of evidence that the FBI failed to operate in a lawful, aboveboard way in searching the premises of Michael Cohen.

Charges that “the deep state” is acting illegally to undermine the depraved regime of Donald Trump—one of its regular depravities being the slathering of opposition as “fake news,” “deep state,” “enemies of the American people”—are without any visible foundation. Which is why I am thankful that the FBI acted lawfully with respect to Michael Cohen, and that the ghost of J. Edgar Hoover is safely ensconced in hell.

Reprint– First published in American Prospect: Afraid of the F.B.I.? NO- http://prospect.org/blog/tapped/worried-about-fbi-no