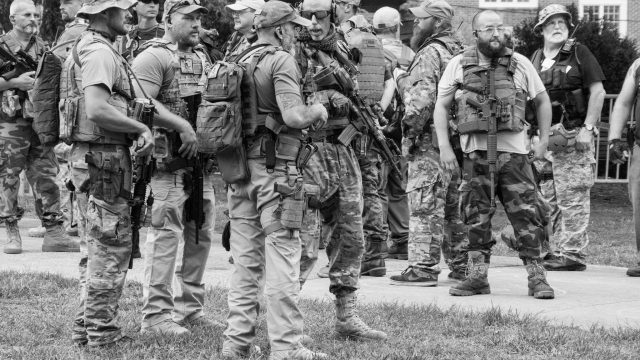 The videos that blasted ’round the world on Aug. 12 tore holes in many a heart. They showed the silver Dodge Challenger careen down a downtown Charlottesville street toward a group of demonstrators, smashing into another car, hurling bodies into the air, killing Heather Heyer and injuring 19 others, and then backing up down the street like the proverbial bat out of hell. The smash of the collision is horrific. The video, and various still shots depicting the murder scene, became instantly memorable — iconic — and deservedly so.

So did the 22-minute Vice documentary that appeared on HBO two days later. If you haven’t witnessed the spectacle of torch-bearing marchers streaming across the campus of the University of Virginia, chanting “Jews will not replace us!” and “Blood and soil!” do yourself the mind-gouging, highly instructive favor of watching. This one is a keeper. Someday you will want to show it to your grandchildren when they doubt that armed-to-the-teeth Nazis stalked through America in the year 2017.

But amid the great flood of reports in circulation on Aug. 12 and since, some stunning pictures that deserved to get heavy play didn’t, and therefore an amazing feature of the day’s terribleness went largely unnoticed — except by the ACLU, whose spokeswoman, Stacy Sullivan, afterward rightly declared that “the presence of firearms may suppress speech by others in the public space,” adding that the organization is “looking at the question of whether government can regulate the First Amendment rights of demonstrators who insist on being armed during public protests.”

White nationalists, neo-Nazis and members of the “alt-right” with body armor and combat weapons on Aug. 12, 2017, in Charlottesville, Virginia. (Photo by Chip Somodevilla/Getty Images)

Regardless of anyone’s intentions, the way an event registers depends heavily on which pictures editors choose, which get churned out through Facebook, and retweeted, and otherwise injected into the media stream. But it also depends on which pictures go unchosen. A frame includes some features of an event and leaves out whatever lands outside the frame. This sounds obvious; it is obvious. But it’s no less consequential. Very likely, if James Fields had decided he had something better to do on Aug. 12 than gun his engine and convert the couple of tons of steel at his command into a murder weapon, other photos would have gouged their way into the public mind.

So armed militias, essential elements of the barbarism sweeping across the country, have not sufficiently registered. And the odd thing is, even the texts of newspaper articles paid scant attention to the phalanxes of armed men, possibly in part because the pictures weren’t used. It’s not sinister that other photos — and videos — didn’t show up much. It’s not censorship. No doubt a major reason is that the murder-by-auto pictures were so much more powerful. No editor should be faulted for choosing them. But there’s a consequence for the way the public sees, and remembers, the event. It still matters.

Photos of the armed militias are, as they say, out there. Reuters sent out several photos of white supremacists, several in helmets and camouflage uniforms, holding semiautomatic rifles. One, taken by Joshua Roberts, illustrated an op-ed piece in The New York Times, and also appeared on CNBC onlineand in The Guardian. A different shot by Roberts appeared in The Atlantic. Craig Stanley’s shot appeared in the Independent. A New York militiaman named George Curbelo helpfully itemized for The Guardian’s Joanna Walters the 60–80 pounds of equipment that each of 32 militia members who patrolled in Charlottesville was carrying:

Most, Curbelo said, were wearing Kevlar military-style helmets. All this gear, he said, was “legal in the US and easily bought online by civilians.”

Meanwhile, another assault rifle incident may not have been photographed at all. According to Alan Zimmerman, the president of Charlottesville’s Congregation Beth Israel, “three men dressed in fatigues and armed with semiautomatic rifles stood across the street from” the synagogue for half an hour. In the flood of Charlottesville publicity, this particular menace was largely washed out, though written descriptions did appear in Newsweek and the New York Daily News.

As for the photos that were published, notice anything about the venues in which they appeared? Many of the news organizations that ran them are British. So far as I can judge, no photos of militias bearing assault rifles appeared in CNN or Fox News online, or in the Los Angeles Times or Chicago Tribune. Other militia photos, variously from the Albin Lohr-Jones via AP, Nurphoto and Chip Somodevilla, did show up in Mother Jones, HuffPost, USA Today and Slate, respectively. The Brits take the appearance of armed paramilitary units more seriously than American media. Over here, armed men in unofficial uniforms are not big news.

Or, rather, the big news in America is that the appearance of armed militias in the midst of political demonstrations is not terribly newsworthy.

According to the ACLU, 46 states allow some sort of open carry for firearms.

These facts too ought to be preserved for our grandchildren.

Thanks for research by Tim Johnson of Media Matters for America.