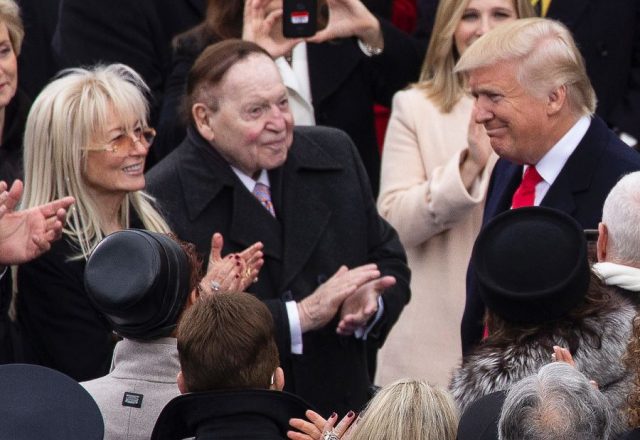 President Donald Trump is set to award the Presidential Medal of Freedom — the nation’s highest civilian honor — to Miriam Adelson. Among Miriam’s many accomplishments is one that reminds Trump of his own wives. So what more do we want from Miriam?

Let aside the striking resemblance between their first initials, the letter M brought to you by the GOP, Ms. Miriam is an older version of Ms. Melania.

Additionally, Miriam has many other virtues. Which ones? She and her husband, big pharma and a lot of other drugs darling, Sheldon, have been prominent Republican Party patrons:

All these achievements are sufficient for TPV. But for naysayers, I would add, look who’s in the competition with Miriam: only has-beens:

And if Miriam‘s heartbeat was not sufficient reason, then what about the recycling aspect of the award?

Inspired by the current H&M campaign, be a Fashion Recycler: Drop off your unwanted garments — no matter what brand and what condition — at your local H&M store and get 15% off your next in-store purchase! the White House has a suggestion. Trump is asking Miriam to leave Sheldon behind so finally Trump can prove he’s no lonely anti-semite. Trump gets a friend and a pet – a Jew (Jared doesn’t matter he’s just a hired sperm donor & temporary stand-in son-in-law).