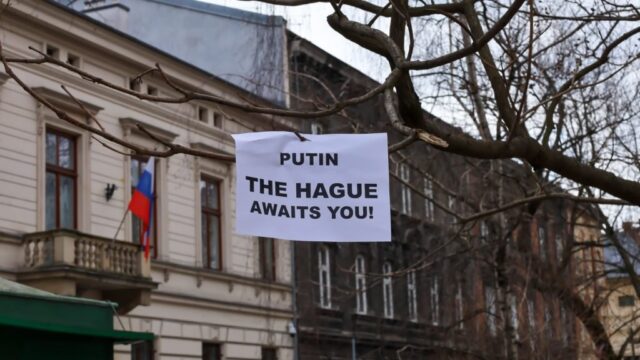 Putin is usually unfavorably compared to democratic leaders.  That may be because he loves Catherine the Great, or Hulu’s The Great. Unlikely, simply because information travels difficulty in times of war. Actually, that is what Putin has achieved with his  informational impressionism.

On 3/4/2022, Duma, Russia’s parliament, passed a bill enabling anyone accused of publishing “false information” to be prosecuted and potentially imprisoned.

According to Russian news agency TASS,

those found guilty of disseminating “false information” about the Russian army face up to three years in prison or a fine of 1.5 million rubles ($13,000). However, those found guilty of using “an official position” – for which they are remunerated – to spread “false information” face between 5 to 10 years in prison and a fine of up to 5 million rubles ($44,000).

“If the fake information caused serious consequences, the term of imprisonment will be from 10 to 15 years.”

While only the Hague can decide what serious consequences await Putin, the March 2022 statute Duma passed on Friday has already had consequences. ThePotholeView will stop hibernating and will write about Putin’s War on Ukraine. Thus, it becomes clear that Putin is at War with Ukraine. That’s the truth and anything else isn’t.

TPV’s Coverage of Putin’s War on Ukraine. Is Duma’s Dyslexic?

But first, TPV would like to clarify something. Maybe the 10 days of Putin’s War on Ukraine and democracy have pushed Duma to read American lessons from middle and backwards. Could Duma be dyslexic?

Why else would Duma plagiarize President John Adams’  the 1798 Sedition Act? Duma could have taken a page from President Jefferson’s opposition to censorship. Imitation- admiration either way.

In October 1799, President John Adams and the Federalists jailed the Vermont publisher, Lyon, for criticizing Adams in print and in front of crowds. Lyon also was a sitting member of the House of Representatives when put on trial.

The Adams administration charged Lyon under the 1798 Sedition Act, for writing about President Adams that he had “an unbounded thirst for ridiculous pomp, foolish adulation, and selfish avarice.”

Now, Putin has an abundant thirst for ridiculous pomp and foolish adulation. Big deal. Shall we start imprisoning people for bad taste? Or vice versa?

Putin’s Bill, like the U.S. 1798 Sedition Act, suppresses dissent and criticism of the government at a time of war: Adams’ potentially with France, Putin’s happening with Ukraine.

The 1798 Sedition Act punished the “writing, printing, uttering or publishing [of] any false, scandalous and malicious writing or writings about the government of the United States” with fines and jail.

Luckily, there was opposition to Adams‘ despotism. Among the critics of the 1798 Sedition Act were Thomas Jefferson and James Madison, who anonymously wrote the Kentucky and Virginia Resolutions. Very clearly, and anonymously, they declared the act as unconstitutional. In fact, Madison said

the act “ought to produce universal alarm, because it is levelled against that right of freely examining public characters and measures, and of free communication among the people thereon, which has ever been justly deemed, the only effectual guardian of every other right.”

Thomas Jefferson is recorded to have said something similar G. K. van Hogendorp, on Oct. 13, 1785:

“The most effectual engines for [pacifying a nation] are the public papers… [A despotic] government always [keeps] a kind of standing army of news writers who, without any regard to truth or to what should be like truth, [invent] and put into the papers whatever might serve the ministers. This suffices with the mass of the people who have no means of distinguishing the false from the true paragraphs of a newspaper.”

Not that TPV is either Madison or Jefferson: TPV is not anonymous.

But, Putin could have imitated Thomas Jefferson more. Putin’s love of out-of-wedlock childrearing is well speculated about, but no one suspects him of love of free speech. Or if he has any, it’s John Adams‘. When Putin should have had Adams‘ love for Abigail, if Adams‘s his American hero.

Oh, Putin, you are simply The Great. Hulu’s Great. Now take a break and stop your war on Ukraine.