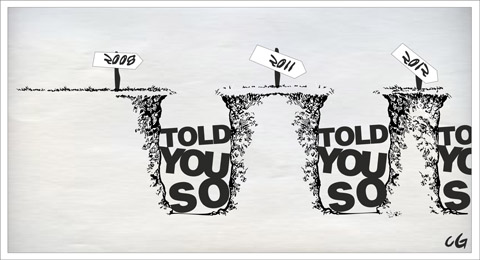 If you predict that something will happen, and then create the very circumstances that will help make that prediction come true, you may well get what you predicted. Such is the case with the double dip recession that has long been feared.

When the recession started, the government response was to create a stimulus program to make up for the drop in private sector spending. But with its $787 billion stimulus package the government essentially tried to plug an economic hole that was the size of a Cadillac Escalade with a Mini Cooper. So the flow through the broken dam slowed, but didn’t stop. Why was $787 billion not enough? Well, in 2009 the C.B.O. projected that for two years the economy would function at 6.8% below its potential[1]—a shortfall of $2.1 billion. $2.1 billion is the Escalade sized hole, and $787 million is our Mini Cooper sized plug.

Putting aside quantitative easing programs (the Fed ‘creating’ money to buy financial assets), which are distinct from stimulus programs, the half-measure stimulus has left us with half (or less) of a recovery, particularly for the majority of U.S. workers whose paychecks don’t directly depend on the fortunes of Wall Street.

Many who favored a larger stimulus have blamed Republicans for the insufficient amount of spending, but while it may be true that Republicans would have prevented a larger stimulus (as it is almost certainly true that they will not currently allow further spending), the size of the stimulus that passed basically matched what Obama said he wanted as he came into office.[3] So while the economists who say the stimulus prevented another Great Depression may be correct, it also did not do what it could and should have done.

Double dip? Single serving was more than enough. But when you do your best to create a self-fulfilling prophecy, don’t be surprised if you get what you predict.

[3]    p. 4 “The Job Impact of the American Recovery and Reinvestment Plan” Romer and Bernstein