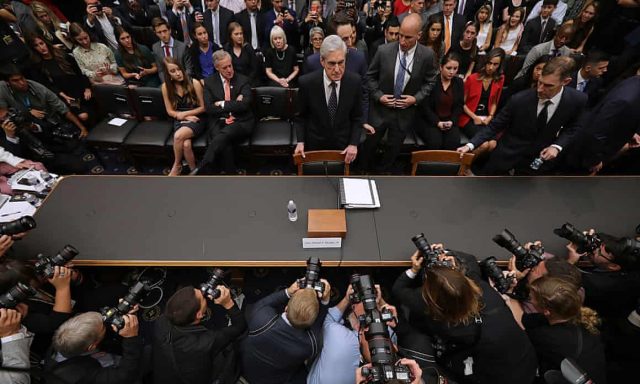 Intellectually sad, Bob Mueller is not into summer reads of American fiction. Not even into its CliffsNotes. Otherwise, he would have known that only Hemingway’s “On the Blue Water: A Gulf Stream Letter” (1939) contained a happy-ending. There, there is no follow-up to the old man who went fishing alone in a skiff far out at sea and who did land a huge marlin. That’s where the story ends.

To the contrary, the summer reads of the 1950s, The Old Man and the Sea, is a sad story, because we watch the follow up; the return to the land. And the reader experiences the same impotence the Democrats experienced watching Bob testify about Trump‘s obstruction of justice.

Like Hemingway‘s readers, shouldn’t the Democrats have known what to expect from Bob? He is a Republican appointee chiseled through a long “yes sir!” public life.  Bob Mueller, the Democratic Hero, thought he was Rocky VI. That’s why Mueller agreed to come out of retirement and improve his minor player reputation in the D.C. moving-and-shakers’ community.

Bob thought he could grab a place onto the pedestal of American action figures, right there next to Kenny Starr of Clinton pedigree. Ultimately, Bob Mueller’ struggle with a bunch of tweeting birds not only did not redeem his long “yes sir!” life, but took the air out of everybody else’s around him. Bob, don’t you regret missing on yessir?

So, not what? Getting rid of Donald has become the white whale of the Democratic party. Can they do it?

Ahab proved unable to catch Moby Dick (that’s the CliffNotes‘ gist). The best Democrats have been the Kennedys, and they are no Ahab either (not that Ahab is something to aspire to, especially with today’s immigration policy).