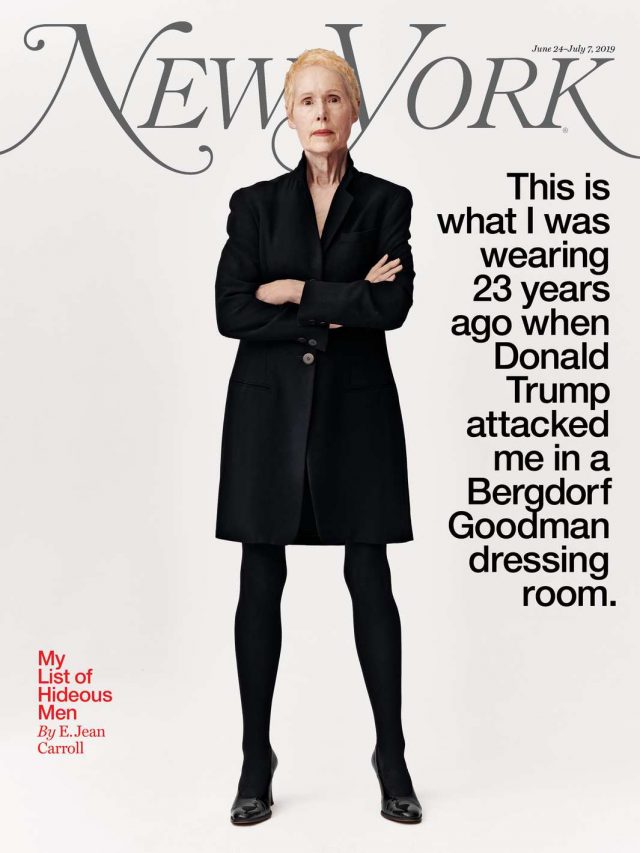 In a luxury department store, such as Bergdorf Goodman Inc. located on Fifth Avenue in Midtown Manhattan, there are two types of services: extra solicitous and delicate. If I were to go there, the service would be impeccable. It would also be overbearing, especially if I were to try on a piece of clothing in a changing room. Now, if in 1995, Don Trump were to follow a woman in a changing room, that service would suddenly become scant and discrete. Like the sweet smell of real estate success on the Jersey water front. Luxury department stores have always been in the selling business, whose motto is: the more you buy the more you are allowed to play.

The Woman, Her Lace, and their Tramp

So, when the cover story New York Magazine published today details an encounter the writer E. Jean Carroll had over two decades ago with Donald J. Trump, I read it fast and panting. Especially when her account receives a meaningless rebuke: the lack of evidence.

Ms. Carroll & New York Magazine: No pictures? No surveillance? No video? No reports? No sales attendants around??

Correct, nothing. The sales attendants were trained not to stick around when two adult, regular shoppers holding a lace bodysuit ran for the dressing room. I guess the training says to make sure the door is closed, to leave the quarters, and return, in Trump‘s case minutes later, with a basket full of cleaner clothes. So, that no one can be found to say they saw the assault, doesn’t mean there was no assault, Don. It only means you got away with it. Again. Do you understand that starting your rebuke this way you appear to admit you did it?

Why did Caroll go to a dressing room with Trump? We will never know. Definitely she was not buying real estate from him. And the guy was a bore. Old age only accentuates people’s traits, so she did not go with him for the conversation. Maybe, he smelled really good. But, once inside the dressing room, apparently, Trump shoved her against a wall, pulled down her tights, and, forcing his fingers around her private area, thrust his penis halfway — or completely, she was not certain — inside her.

Oh, dear Caroll, not to know when a penis is halfway or completely in is unfortunate. Sad. But, there was some luck around that day. Fortunately, you were both clean and no STD got exchanged, otherwise you would have told us, or Trump would have remembered you. His rebuke finally states he doesn’t know you. As there was no staff around to back up your story, his denial would probably stick.

Which brings me to the next point: why did you share? Trump thinks you want to sell a book or two. That is commendable and we wish you luck. Next time, please, write something more uplifting, and, pretty please, avoid redundancy and public knowledge. We could have Googled “Trump” and “women” and come up with something very similar. Okay?