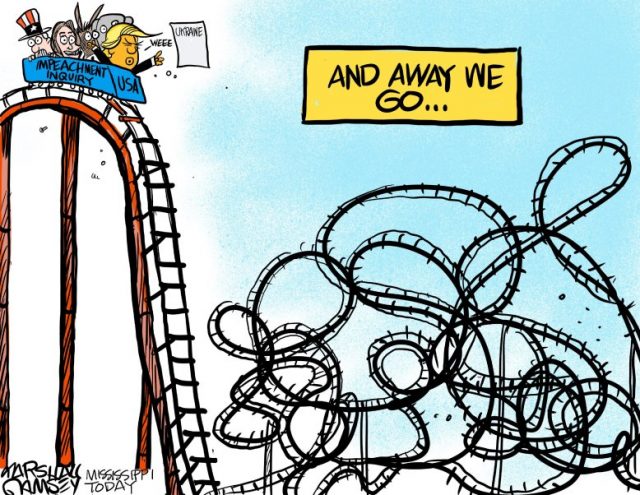 Life in Trumpland is so busy, that people sing and dance from dawn to later in the day to keep going. No opioids. No vaping. Only the expected gun fun. And the impeachment saga to fill in the entire weekhole.

Tuesday, 11/12 is all about “Witness intimidation” and “bribery”

In other words, TheWeekholeView is about intimidation, witness tampering, and bribery. The star is Ukraine, a rather imposing country near Russia which asked for arms. Trump wanted Joe Biden moratlly vulnerable. Joe, the 2020 presidential candidate for the ball-less democrats, is running his own campaign into the ground. Trump only needed to stay put and wait.

Instead, as Big Bird of Sesame Street would say: the word of the first week became”bribery.”

“Bribery” is important as a word, because it happens to be in the Constitution when referring to reasons a president could be removed from office.

Nancy and other democrats

“What the President has admitted to and says it’s ‘perfect,’ I’ve said it’s perfectly wrong for the US president to ask a comedian such as Zelenskiy to do him a favor.”

During a July call, Trump asked Zelenskiy for a “favor” to investigate a conspiracy theory about Ukraine’s involvement in the 2016 election and former Vice President Joe Biden and his son Hunter, who served on the board of a Ukrainian energy company, Burisma.

That conversation did not happen out of the blue. David Holmes, a political counselor in the U.S. Embassy in Ukraine, testified that he heard a phone call between Trump and the EU ambassador where the two men referred to a third man, Zelenskiy as easily intimidated by the Americans. However, Holmes showed disappointment at the Trump July call. Holmes was convinced that no bribery was necessary to get the Ukrainian to roll over and bark.

If Trump had only asked nicely, there would have been no impeachment today. But then, so many things wouldn’t exist if instead of raping, killing, stealing, someone would have asked nicely for sex, a bear, or a dollar.

As the week was coming to a close, Trump asserted his freedom to be foolish and twitted about the only female witness, the former US ambassador the Ukraine, Marie:

Everywhere Marie Yovanovitch went turned bad. She started off in Somalia, how did that go? Then look at Ukraine, at war with Russia. Shouldn’t Marie know that it is a president’s absolute right to appoint, disparage, and intimidate ambassadors? Vlad fires them.

the mighty president of the former slave-owning colonies

Marie Yovanovitch, the former US ambassador to Ukraine, was spotted skating in Central Park, at the former Trump Skate Rink, now again, known by its celibate name, Wollman Rink.

Proving that that there is life outside Washington, DC, four people were killed and six people were injured after “unknown suspects” snuck into a “friend and family gathering” on Sunday in Fresno, California, police said. …

“Everyone was watching football when unknown suspects approached the unlucky residence, and asked for beer. Not receiving any answers, the unknown suspects open fire, and then helped themselves to the beer and the untouched burgers.”

In advance of the second week of impeachment testimony, the Californian government proudly announced that it found a way to stop the mass shootings. Because more than 12,000 people died in California from firearms between 2014 and 2017, according to the data from the Centers for Disease Control and Prevention :

“Starting in July 2021, white Californians will only be allowed to purchase one long gun per month, while other Californians will play target. Whites younger than age 21 will only be allowed to buy a gun every other new moon.
Under a separate law, the state will soon allow teachers and co-workers to request a court to take a gun away from someone they believe to be dangerous. That should create a lot of work for local attorneys and paperwork for the local bureaucracy. “

the state government of California