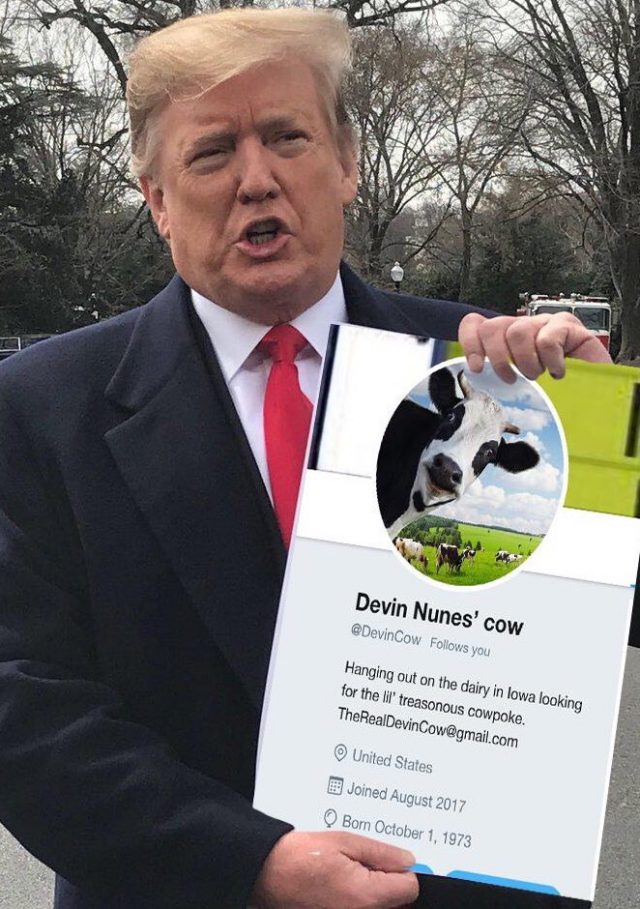 Had we had more staff members at TPV, we would have cowbell fun every day. But alone, we can only aspire to do like God, and chew every seventh day. Here is some of the chunkier pieces that fell through the pothole:

On Saturday, Devin Nunes positioned himself again as Trump’s shield on Capitol Hill, taking the intelligence committee’s probe into possible Russian meddling in the 2016 presidential election and turning it into an attack on the FBI. Nunes announced that Trump’s transition team was illegally surveilled, and that he was going to meet with a source in the White House.

On Sunday, Nunes met with his source, Eric Trump, who told him:
“For sure I was surveilled. I am surveilled as I speak to you.”

On Monday, a parody Twitter account Devin Nunes’ cow @Devin Cow, purporting to be owned by an unhappy cow living on one of Rep. Devin Nunes’ Iowa farms, also unfairly surveilled by the F.B.I., attacked the California Republican as a “treasonous cowpoke” and “udder-ly worthless”.

On Tuesday, others added to the parody and soon the social media (@Devin’s Mom and @Devin’s Goat) was having a field day with Republican congressman Devin Nunes:
“The people of California’s Central Valley are upright folk who work hard, look you square in the eye and give you a firm handshake. And then there is @DevinNunes.”

“Devin might be unscrupulous, presidential fluffer and swamp rat, craven, back-stabbing, charlatan and traitor, but he’s no Ted Cruz’.”

On Wednesday, Devin sued the sassy cow, @DevinCow, Twitter and some other tweeting tormentors for defamation for a whopping $250 million, plus punitive damages of $350,000. That night daddy Trump and mommy Melania congratulated him and used Melania’s winning record as an example. They forgot to mention Melania won in British courts applying British law. So, sad.

On Thursday, Devin discovered what happens if you have a beef with a cow. The sassy bovine had only 1,204 Twitter followers before the defamation lawsuit. As of late Thursday evening, it had 610,000 followers, and the number was growing by the hour.

By Friday, @DevinCow had grown to 620K followers, one is @ThePotholeView, and Nunes was nowhere closer to discover who’s the cow he sued. Worse, his Republican budy, Republican Senator Lindsey Graham, said:

“Devin, in his desire to lick Trump’s boots put himself in a position of being easily kicked in the rear. So now, he has an Inspector Clouseau investigation here, and I am kicking him, too.”