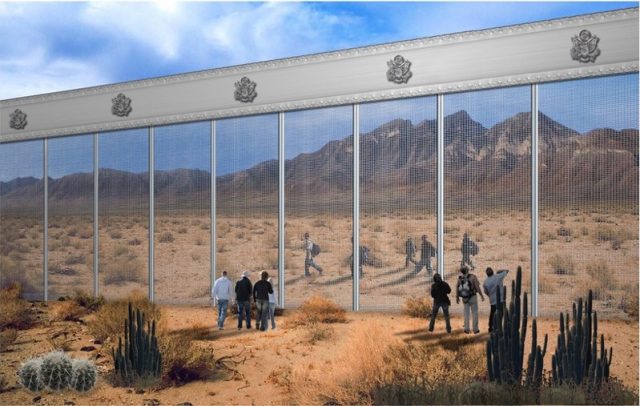 Marquel listened to the broadcast ‘The Daily’: Trump’s Border Wall https://nyti.ms/2G6RDNt and then leafed through the paper:

It was a stunning article. Marquel could see its logic. Netanyahu approved new settlements on the South Bank of the Rio Grande, calling it “part of the historic lands of Ivanka and Melania.” But it didn’t make sense to extend the southern border to Panama, at least not to Marquel. He decided to give Bibi a call.

“Shalom, chaver sheli,” Marquel replied, remembering the rollicking good days just after Rabin was murdered, “I want to know about the wall.”

“Fascinating subject. We were going to go with the see-through wall. It was really modernistic.”

“But,” questioned Marquel, “how could that work almost two thousand miles? That’s tens of thousands of those glass panels. Exorbitant. Even Israel couldn’t pay for that. With billions of U.S. aid.”

“And it was the cheapest alternative. We didn’t have to cover the entire border. Don’t you get it?” asked the new Secretary of Border Security.

Marquel pondered this. “Frankly no.”

Again Marquel was stumped. He felt like a kishke. “No.”

“We put up two thousand miles of see-through wall. One panel at one end and one at the other. How would they know there wasn’t anything between them?”

Marquel was shocked. “That’s crazy. Could you do that for two thousand miles?”

“Now you’re getting smarter, my little knishe. It was so cheap. And they believed it. Do you know what Mexican President Nieto said?”

“I’ve read nothing about it,” said Marquel.

“Well we couldn’t publicize any of this if we wanted people to believe it. He said he wouldn’t pay for that much. Even he was fooled.’

I could see the logic now. It was genius. I asked my friend Bibi, “So why haven’t you chosen this solution and be done with it?

“Manpower. We had hired French mimes, and every few miles they would be wiping down our imaginary wall, bumping into it, falling, holding their heads, like that.”

Now I had to admit that was brilliant. So I did. “Brilliant.”

“I can imagine. So that idea was shot?” I asked.

“It was too good to be true. But it made me think about the settlements. They really work. Instead of stopping immigration, you just immigrate to where they are.”

“Yes and no. The boss is crazy about it. And the evangelicals. And so is the president.”

“We told him he was crazy about it. So he is,” said Bibi.

“Okay, but what about the historic lands of Ivanka and Melania?” I asked. “That’s truly crazy.”

“You might think so, my little blintze, but it works, I’ve found. They are called facts on the ground. We have settlements planned from Nogales, Texas, to Honduras, Guatemala, all the way to the new border. Costa Rica is already handled and of course Panama is no trouble. The wall is at the Canal. Donald has his wall! Only 50 miles instead of 2000.”

I suspected this wouldn’t work. Not like the see-through wall. That was genius. This was idiocy. “What about the people there? Will they be citizens and get to vote? If not, we’ll end up like South African apartheid. We can’t have millions of people without rights.”

“Don’t be silly,” said Bibi, pausing for emphasis, “they are all citizens of other countries. They can’t vote in our elections. There isn’t even a plausible argument in favor of that. This is a solution I wish we could have had in Israel. But that’s ancient history. Here in the New World is where all the action is. This is the future. Any other questions, my little matza?”

I told him that was enough.

I mulled it over and finally sputtered, “Mi kasha es su kasha.”

I turned on the radio again. More bad news. My head was spinning. My stomach was…hungry. I called Katz’s for delivery.