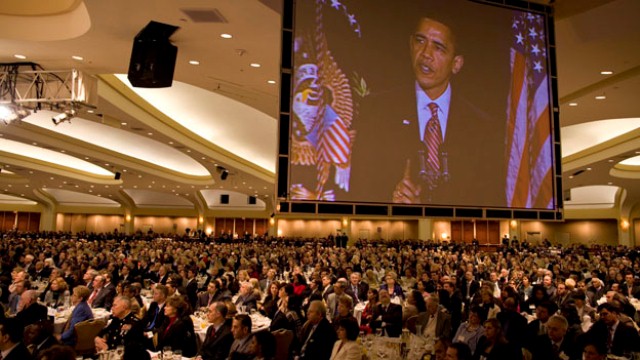 [embedyt]http://www.youtube.com/watch?v=CcPSLgXr1vQ[/embedyt]President Barack Obama seems to have disparaged the sensibilities of both Christian and Muslim critics by comparing Islamic extremism to the Christian Crusades during last week’s National Prayer Breakfast. Obama argued that “humanity has been grappling with” the tension between the good and bad deeds done in the name of religion for ages.

“And lest we get on our high horse and think this is unique to some other place, remember that during the Crusades and the Inquisition, people committed terrible deeds in the name of Christ. In our home country, slavery and Jim Crow all too often was justified in the name of Christ.  Michelle and I returned from India — an incredible, beautiful country, full of magnificent diversity — but a place where, in past years, religious faiths of all types have, on occasion, been targeted by other peoples of faith, simply due to their heritage and their beliefs — acts of intolerance that would have shocked Gandhiji, the person who helped to liberate that nation.”

While 2016 Presidential hopeful Bobby Piyush Jindal considers the comment “insulting to every person of faith” and a “history lesson” that ignores “the issue right in front of his nose,” Muslim scholars are not pleased either.

President Obama is saying, “Muslims are vicious and in need of being civilized,” complained a spokesperson of American Islamic Public Affairs Committee (AIPAC).  However, the spokesperson was not surprised by the audacity of Obama’s remark:

Reality has been distorted to the benefit of the colonizing powers ever since imperialism existed. Muslims have been painted in a negative way from the very outset of the colonial process. In The Wretched of the Earth, Franz Fanon quotes Monsieur Meyer, the representative of the French imperial power in Algeria, and describes how Muslims are gradually portrayed as a kind of quintessence of evil. Not only are they presented as valueless, but seen as the negation of values.

And while Muslim leaders were complaining that controversial comments relegate their community to the “past”, Rick Santorum, another 2016 Presidential stated;

“Today’s remarks by the President were inappropriate and his choice of venue was insulting to every person of faith at a time when Christians are being crucified, beheaded, and persecuted across the Middle East.”

Leading FOX celebrity Eric Bolling ended his recent TV show Cashin’ In with his absolute disgust stating that exactly “zero” people have been killed in the name of every single religion outside of Islam.

The Crusades don’t count, but Bolling refused to elaborate, except to say that he was talking about “people not Arabs.” Bolling said Obama not only crossed the line, but “pole-vaulted over the line.” He concluded that Obama’s comments were “deeply offensive to Christians” and he should apologize immediately.

This TPV correspondent will be working with SNL’s ‘What’s up with that?’ to see if this National Prayer qualifies for an episode, and whether the President would consider making a cameo.

By IBRAHIM SAJID MALICK:  ‘What’s up with that National Prayer Breakfast?’