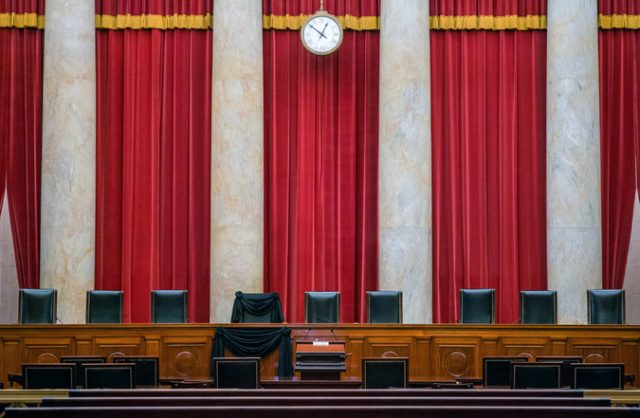 Marquel, TPVs NYTimes Originalism Section correspondent, was mocking himself in the mirror when her read that President Raises Stakes in Supreme Court Nominee Battle. During a news conference, President Obama said there was no basis in the Constitution for Republicans to refuse to hold hearings and vote on his nominee.

Especially, he said, because the constitution has such detailed mandates for such procedures.

“Neither I nor the republicans have any discretion here, ” said the dark complexioned Pres. “It says in section 11, that “the president shall deliver his nomination promptly, and twice as promptly during his last year. “

According to that, thought Marquel, it seems the Republicans are dead wrong, and treasonous to say they won’t even consider holding hearings.

But several republicans told Marquel that they might have to consider, but they can advise and not consent. In other words they can say no.

Is that possible? What’s the point then?

According to Barak everyone is reading the document wrong.

“Advice and consent was written in 1780. It was a much more genteel time. When you gave advice it was about food. ‘..a little more cinnamon. Less blueberries. Perhaps some honey.’ That’s what it meant to the framers. Now, ‘consent’ is much more clear. They have to approve my nomination.”

“Hey man, I was a con law professor. Don’t you think I know my subject matter?” He asked.

“Well that’s deceptive,” said Marquel. “You were an adjunct professor. That’s where they dump all the incompetents and affirmative action supplies.” noted Marquel.

“So they have to confirm?” I asked.

“Well they can suggest more salt or pepper, some allspice, maybe a bay leaf. A little vinegar. Balsamic. But that’s it. Then it’ll be Justice Moesha.”

“You’re nominating your daughter?” I asked.

“The trend has been to go young to lock them in for generations so I’m following that trend. Plus she has a superb palate. I think the seasoning will be perfect. Just consent, no advice, isn’t that great?” He asked.

“I guess so,” I supposed. I thought about how monstrous Scalia had been and said, “It’s actually a great nomination. You go bro.”
***
By MARQUEL: Here Goes Scalia’s Legacy – Down the Drain