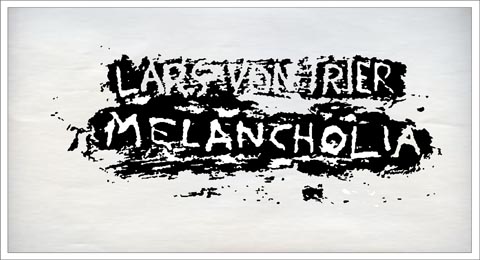 Let’s face it, Melancholia, by Danish director, Lars von Trier, is not a crowd-pleasing feature for Americans. It’s about a woman who feels it’s OK to choose death over a life of compromise. And this is a sad message. Worse, it’s a message which brings to mind a more original one. Remember the words of Private Joker in the final scene of Full Metal Jacket (Stanley Kubrik, 1986): “I’m in a world of shit . . . yes. But I am alive. And I am not afraid.”

Cut back to Melancholia: what does Justine (Kirsten Dunst) feel? Let’s see: she lives in a world of shit. Check. She accepts it. Check. She is not afraid of her circumstances. Check. Is she happy to be alive? No. Is she doing anything about it? No. She is only happy because she is going to die.

Lars’s artistic credo here, seems to be that deep in a woman’s soul lies a beautiful and immense energy which, were it to manifest itself in our petty bourgeois universe, would become a strange, magnetic, giant blue planet of death. It would increase in size from day to day until it eventually became large enough to collide with our world of sin. It would annihilate life on earth. Alas, it would cleanse us of vanity, superficiality, lack of love, and boredom. Yes, boredom is still a sin. I learned this from watching Melancholia. I confess it.

Melancholia is a virtuoso exercise in an area devoid of interest to the broader audience (if this audience would ever lay out the cash to be bored by von Trier). On the positive side, because there is a positive side to everything, Melancholia may feed the contemporary Bovarysm of some “feministae” worldwide. It may nudge them into a long-expected and perhaps well-deserved public validation of those deep and unspoken… melancholies.

It is entirely possible that the character of a woman who dares to project her inner sadness on a planetary scale may appeal to a certain je ne sais quoi that women everywhere secretly hold dear, deep down in their blessed little souls. Would that sadness be strong enough to destroy our world? According to Lars, the answer is “yes.”

Of course, a more constructive question might be, why would anybody harbor such negativity? But that is not Lars von Trier’s question.

Maybe film is not the best medium for philosophy and metaphysics. Unless frivolous (see Inception), philosophy and cinema do not usually produce a very palatable cocktail. Together they fail to hold our interested for two long hours.

However, Lars von Trier’s movie does invite those of us who do not leave the theater thoroughly bored, to indulge some obscure desire for an exploration of our thoughts, emotions and beliefs – affording each spectator that rare, and perhaps planetary experience, of an expansion of self-perception.

The story moves methodically and slowly enough to permit one to easily follow what would otherwise be an imperceptible transformation of the characters as they move toward “the inevitable.” Meanwhile, the vision of doom that absorbs Justine brings her peace precisely because the end is nigh. She seems to accept it because to her it is just.

I believe Europeans may see it as the “Angela Merkel” peaceful ending. Americans may not have a name for it yet.