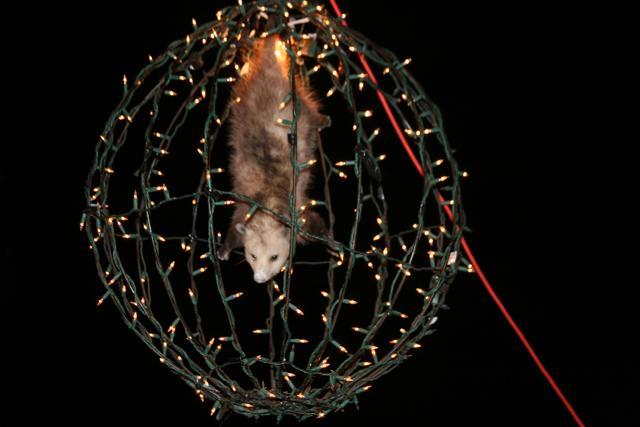 Following challenges from People for the Ethical Treatment of Animals, the organizer of this year’s annual New Year’s Eve Possum Drop says he will no longer use a live opossum. Marquel was baffled by the solution apparently approved by Peta: use dead possums.

The ceremony is mysterious but one of the residents told me,

“So this is to celebrate the U.S.mail? They don’t do anything worth celebrating in New York.” I said.

“No, they don’t do much here either. But it’s the only place that stays pretty dry in a rainstorm so people tend to hang out there.” he said.

“So why does it matter that it’s dry in a rainstorm?” I asked.

“Don’t know,” he said, “but people always say, ‘meet you at the P.O., it’s dry there.’ Actually there’s no other place. It’s the only building in town.”

“Some of the boys get pretty lickered up. Most of the rest have a beer or two. Old Jack Johnson, the honorary mayor, he makes a speech.” He said.

“He says the same thing every year.” He said.

“Beats me. Nobody understands Jack even when he’s sober. But New Year’s Eve, he has to be held up to stand without falling. He’s always the drunkest. That’s when he raises the possum up the P.O.  flag pole.” He said.

“How do they raise him? Tie him to something?” I asked.

“Oh no. A possum’s got a nasty bite. They keep him in a cage, and raise the cage with the possum inside. You can see his beady eyes glow all the way to the top.” He said.

“Then what happens? You wait till midnight?” I asked.

“And they lower the possum?” I asked.

“Eventually, yes. First we sing something. Star Spangled Banner, America the Beautiful, Auld Lang Syne, Mares Eat Oats, and Jack’ll say something like, ‘Bring ‘er down,’ or something that sounds a bit like that, and they release the rope and that possum, she just comes down like a crow full of buckshot.” He said.

“So what about this year?” I asked.

“Judge Johnson said it has to be dead.” He said.

“Is that Jack Johnson the drunk mayor?” I asked.

” ‘Course not. It’s his younger brother Luke.” He tapped his head with one finger and said, “a bit slower. We used to call him retarded until he became a judge.”

“And he said no more live possums? Where will you get a dead possum?” I asked.

“Same way you get the live one. But then you shoot’em.” He said.

“How could PETA support that?” I asked.

“They and the judge agreed we could get some road kill. Or we could use a pot of possum stew.” He said.

“How many possums in possum stew?” I asked.

“Oh there’s no telling. A dozen maybe, maybe more. Depends on how many potatoes you can find.” He said.

“So instead of one scared possum, PETA prefers twelve dead ones? What about road kill?” I asked.

He leaned towards me and almost whispered, “that’s why we called him retarded. No one ever leaves road kill, specially possum. They take it home and eat it. There’s not a chance of finding a dead possum in the street. They get scooped up almost before they get run down.”

“So that leaves stew or one freshly shot possum.” I observed.

“As long as it’s possum I don’t think anyone much cares. But we gotta have our New Year’s possum like you need your Times Square.” He said.

“Beats the Hell out of me. Jack explained it once at town meeting but nobody could figure out what he said. We’re just committed to a possum and Jack’s explanation kind of sealed it.” He said.

“So what will it be this year? Stew or possum?” I asked.

“That depends on Jack. He shows up with a big pot, I guess it’s stew. If he’s got a dead possum in a bag, it’ll be the possum. I’m bettin’ on the possum.” He asserted.

“Even dead, those beady eyes’ll glow like a live one. Stew would be a real problem.” He said.

“All those drunken people and possum stew. You’d have a lot of puking going on. At the P.O., I guess it wouldn’t be so bad.” He said.

“It’s the driest spot in town.” He repeated.

“Happy New Year to you, too. Come by for the possum drop.” He said.

I nodded and got out of town quick.
***
BY MARQUEL: Happy New Possum