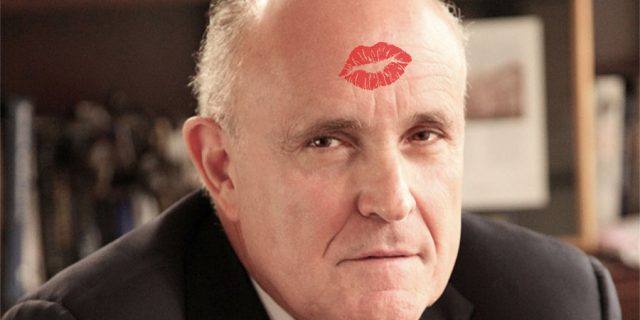 Marquel, TPVs NYTimes Scoundrel’s Last Refuge Section correspondent, was trying to remember if he ever had a mom, or a plunger, when he read that Giuliani said “Obama Had a White Mother, So I’m Not a Racist.” Marquel considered Giuliani‘s criticisms.

Giuliani didn’t explain why Obama‘s love was necessary to cure America’s ills. Most of them have to do with money, and violence. Marquel assumed his accountant didn’t love him, but Marquel was more interested in avoiding an audit  than a kiss from Hyman, his accountant. Giuliani also said he missed Reagan, even though Reagan, in deep Alzheimer’s for the last forty years of his life, would never have missed the ex mayor.

Love is strange, especially the asymmetric variety. But Giuliani has always been more interested in appearances than reality. Remember his plan to paint fake windows and curtains in dilapidated buildings to make the neighborhood look better and, mysteriously, crime resistant?

A trip to Giuliani’s secret East Side Mansion was all it took to gain an audience with Sir Make Believe.

“Now tell me, Mayor, why Obama’s parents’ race makes criticism of him non racist? Weren’t a lot of slaves half white because their masters raped their parents? Did that make slavery non racist? How many white slaves were there in the 19th century?” Marquel asked.

“That’s a lot to answer. I don’t think there were any white slaves and yes there were half white slaves due to rapes. But that was in slavery. In today’s society being half white makes a difference. And one of those differences is that when you criticize someone like that, it’s not necessarily racist.” He said.

“But along with your unsupported claim that Obama doesn’t love his country, it starts to sound racist. You said he didn’t love you. Does he have to love you to love America?” I asked.

“Does the same go for all of us? If I love America, do I have to love you…and vice versa?” I asked.

“No but the president is different. He stands for America.” He said.

“So you think Ronald Reagan loved me? He made me nauseous and I laughed at his lack of intellect and I mocked his wife, Mrs  Icicle. He loved me?” I asked.

“Maybe not you. But you’re obviously not a real American. Otherwise he would have loved you.” He said.

“Sounds like cheap promiscuity to me.” I said. “What about the crusades? You objected to Obama’s comment that Christianity had killed millions for Christ.”

“It was simply untrue. It wasn’t Christianity. It was European nobility. If you don’t know the difference, you’ve got a dilettante view of history.” He said.

“You said the same of Obama. Recognizing the crusades as Christian violence is dilettante?” I asked.

“I think it’s a very limited view of Christianity, made up to fit an argument.” He countered.

“One might say that about you.” I said, “You thought crime was caused by broken windows instead of human despair.” I said.

“When someone robs you he doesn’t point human despair at you, he points a gun.” Said Giuliani.

“And he’s probably black.” I said.

“Could be,” sparred Giuliani.

“But that’s not racist if his mom or dad is white.” I suggested.

“And Obama hates America because he almost definitely doesn’t love you.” I said.

.
“I think you’re looking for a prostitute not a President.” I said.

“You’re the one who said he wanted another Ronald Reagan who made believe he loved everyone. Isn’t that true?” I asked.

“No, he really loved America.” He said.

“They always tell their johns that.” I said.

I was ready to leave. But I had one more question. “You say Obama can’t be a real American because he’s not like the rest of us. Different background.”

“So JFK, FDR, and every other president who came from wealth, private schools, yachting, the Metropolitan Club can’t be real Americans. They didn’t share our experience.” I said.

“I think you did. You and I shared the same experience. Lower middle class, maybe even lower class, New Yorkers.”

“Believe me, I’m not. You’re in a class of you’re own. No class. But I still love you.” I said.
It had been a long interview. But he seemed better when I professed to love him. I went home to wash out my mouth with something strong.
***
*By MARQUEL: I Love Giuliani